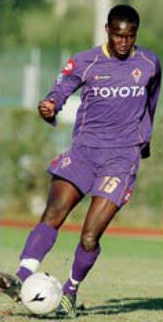 Well, the fact that I turned 30 last week and one of the key forward prospects for Fiorentina is celebrating his 17th has me feeling a bit old this morning. But, this fact makes his recent contributions all the more exciting. Hopefully the squad can continue to bring the young man along slowly, and hopefully he continues to progress and harness the raw talent he so obviously has.

The official site wishes him a happy birthday, and let's do the same with this Blair Witch Project style video from the Curva of his goal in the Coppa against the Donkeys:

Not a whole hell of a lot going on this morning beyond this. There's Santana's press conference yesterday, wherein he outlines the team's goal to have a successful end to the season to try and get over the disappointment of being knocked out of the champions league. More training is on tap ahead of the big match against Genoa. Looks like they will be without Dainelli, which is good for us but it would have been nice for the crowd at the Franchi to give him a warm greeting. There will be other chances.

Congrats to Inter, aka Coefficient, on a big win yesterday. Let's hope this moves our second leg of the Coppa Italia down on their priority list, as we've got that 1-0 deficit to overturn at the Franchi (and get one step closer to a trophy). I'm obviously no fan of theirs, but I must say that I'm quite happy for their Zanetti and Cambiasso. Those are two quality and classy players who never really get the respect they deserve for their outstanding achievements, and they deserve the opportunity to test themselves in the advanced stages of the Champions League.

And, my Irish half wishes you a Happy St. Patrick's Day. Fóraim corcra! (Per google language tools, that's forza viola in Gaelic)