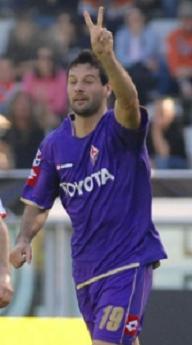 This Evening at Stadio Ennio Tardini in Parma, Fiorentina face off against old friend Massimo Gobbi and the Parma Duchy Men in an elimination Coppa Italia match.

Both squads are mired near bottom of Serie a and both squads are making noises about the Coppa Italia being their path to European competition. That being the case, we might see lineups closer to a Serie A match than we might have if conditions were different.

Of course, at the moment, the "starting lineup" for La Viola isn't what it once was. Avramov will be back with one last shot to show that he really is a goalie. Reports are that Michele Camporese and Nikola Gulan will start in back for Kroldrup and Pasqual. Bolatti might go in favor of Donadel and Babacar is likely as Gilardino is not available and Mutu ran his butt off last match.

I don't know much about Parma other than they have this guy named Hernan Crespo and another guy that used to run the fields of Firenze, Mr. Gobbi. Boy he'd look good in purple right now...

Weather in Parma is freezing, foggy now, but should be clearing, 26 F this evening.
Game is at 3pm eastern, no TV, no espn3