Share All sharing options for: "What can you do with a Third String Goalie..." 2-1 Udinese 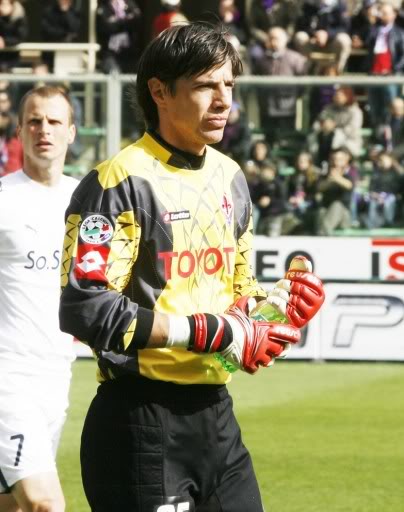 Shave his belly with a rusty razor!


Nothing. Like a drunken sailor, you can do nothing with a third string goalie and a patched together defense except lose and that's exactly what our lads did to the other team in Italy that likes to dress up like Newcastle United.

Recap
A shock goal from far out by Mario Santana at the half hour mark, gave Fiorentina an unlikely lead, and they were only able to hold it for another half hour as Armero was left alone by a poor Viola midfield and unleashed a wicked strike from 30 yards to equalize the match. It only took another 15 minutes for Di Natale to completely expose the uselessness of the Fiorentina back line and put the winner past an Avramov that, in my humble opinion, shouldn't even be on the squad.

I'm not sure if it was a failed offside trap or just our normal Keystone Kops routine, but if you look at the replay of the second goal, four Fiorentina players are in a line in FRONT of two Udi attackers and poor old Comotto is in between them and the goal.

It was an ugly match, played on an ugly day, with an ugly performance by both squads and by the refs as well, as Fiorentina had more than twice the fouls called on them as Udi (16 to 7) and had a couple of clear offsides not called, not to mention SIX yellow cards for la Viola and only 2 for Udinese. Lots of diving and time wasting by the home squad down the stretch just put the icing on this mess.

The loss only drops Fiorentina to 13th place as Bologna, Catania and Parma all lost, but with a postponed match with Inter next, we stand to drop some more next week.

Report Cards
Avramov - not a Serie A quality goalie. get rid of him. if you need a third string go to your young gun, Seculin, at least he's got upside. ZERO
Comotto - did well considering the situation, but got tired and was completely useless one on one on the second goal, not all his fault tho. 4
LDS - out of position and looked it, he's very slow getting back, had to pull someone down from behind for his yellow. 4
Gamberini - very lucky not to have a handball called.behind the goal scorer on the second goal. should NEVER happen. 4
Kroldrup - did ok, but the same thing applies, 2 guys got past him for the goal. not the 6th best defender in Serie a this season by a longggg shot 4
Donadel - got another stupid yellow and won't play the next league game. almost got a second before Mihaj could get him out. 5; Zanetti - props for effort, but he's done. old and slow and of no use. 4
D'agostino - took a vacation. was pretty much invisible. didn't even have the up side of decent free kicks 4
Santana - had a pretty horrible match except for the long strike. lots of errors, but really had the most success of anyone in the purple front. 6 for the goal alone
Vargas - spent a lot of time playing back to cover LDS and when he does that, he cannot regain any sort of offensive presence. 5; Babacar - still too young n/a
Ljajic - in a rough patch, bad passing all game except for one pass on the sideline that he got to Santana in space. he looks really overmatched against the men of serie a. 5; Bolatti- buh bye 4
Mutu - not really a factor, he ran around a lot, but he can't win long balls with his chest or body and can't jump high enough to win headers. Futile 4
Mihaj - got outcoached from the start today, his lineup just didn't work against the 3-5-2 of Udi. lads didn't give it their full effort, putting lds on the other side just didn't work, couldn't find an answer. none of his substitutions improved the team. 3

Looking Ahead
The Coppa is looking to be our only chance at European Competition next season, and I believe that Sinisa is desperate to end the Fall on a high note, so we may see as many starters as we can field.

Unless we start to get ahead of this injury epidemic, it looks likely that Europe is a pipe dream and that we will muddle around in the bottom half of the table for the rest of the season. i don't fear relegation, there's four squads that are REAL bad that will fight for that, so I think that we should stop this nonsense with players we know are barely serviceable and start making a commitment to our youth. I don't care if Seculin, Gulan, Capmorese or Carraro are too young, they can't be as bad as what we're putting out there (Avramov, Felipe, Comotto, Pasqual, Zanetti) and at the very least should have more energy than the old cows we have now.

Holiday Wishes
Since the Holidays are for giving, I think this winter break we should give, give, give. (for a nice nominal fee, of course)
get rid of Felipe, Bolatti, Avramov, Zanetti,

a starter to replace Pasqual and another center back would be real nice, but those are hard to come by. also some help in the middle is pretty necessary, Monto is coming back, but D'agostino is a bit to inconsistent for my liking