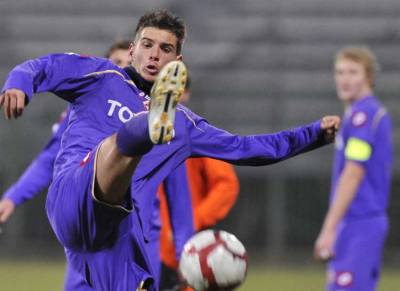 Coppa Time again. Time to have a nice easy little match where we get to see our future stars get a little playing time.

We're up against Reggina, a team that in the last few years in Serie A we've historically demolished. Most recently in the 2008-2009 season where we won 3-0 with a Pazzini penalty and a Gila double including his 100th and 101st Serie A goals.

Reggina currently sit 4th in the Serie B table and come off a 3-1 loss against Novara over the weekend. They are without ex-man Bonazzoli, Costa, Barilla, Montiel, and Missiroli. Although look out for ex Catania man Tedesco, and Milan youngster Adiyiah, as well as Colombo and Cosenza in defense.

They'll come to Florence playing a 3-5-2 with Kovacsik in goal, Burzgiotti, Cosenza, and Giosa in defense, Colombo, Laverone, Maita, Rizzato, and Tedesco in mid, and Adiyiah and Sy up front.

The purple people eaters are going for a complete turnover:

In goal will be Avramov (although Mihaj said this was his plan before Boruc was injured) with De Silvestri, Kroldrup, Felipe (dammit) and Gulan in front, Zanetti and Bolatti will cover mid with Cerci on the right and Papa Waigo on the left. Ljajic will play alongside Babacar.

With all hopes Felipe will run into the goalkeepers post, get knocked out and be replaced with Masi. Camporese was probably left out to recover, but i'm not worried. It would be nice to see Acosty Carraro and i'm curious about Taddei as I don't know much about him. Intrestingly no call up for Matos.

Fun fact: Carraro is currently the top scorer of the Primavera league with 9 goals.

This is a one way elimination match. Winner will face Parma at the Tardini.