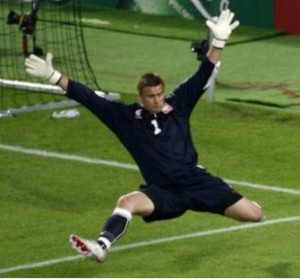 Seems to be a reoccurring theme, but two beat up teams, Juventus and Fiorentina limped onto a nearly frozen pitch Saturday Evening and slugged it out to a 1-1 draw. There were many hilights and many lowlights, most notably an in-form Juan Manuel Vargas and an outstanding performance by goalie Artur Boruc and unfortunately, the string of injuries continued, with Alberto Gilardino, up and comer Michele Camporese and Artur Boruc all getting injured. Add horrible performances by defenders Gianluca Comotto and Manuel Pasqual, not to mention soon to be former Fiorentina defender Felipe dal Belo's red card and there you have it.

Things started swimmingly for La Viola as a Juan Manuel Vargas strike deflected off of Motta for the early lead, stunning the Bionconeri:

A few minutes later, Alberto Gilardino nearly had his head taken off by Marco Motta, but was able to return after going off and having the ultra stylish Italian head bandage and hair net combo applied. During his absence, a nice cross off a Del Piero corner was sent wide by Bonucci. The first 15 minutes ended with a weak header by spark plug Milos Krasic that was easily scooped up by our man, Artur. Krasic was held quiet most of the match due to Vargas marking back on him, necessary due to Manuel Pasqual obvious inability to cover.

Hilights of the 2nd 15 minutes included a weak header by Fabulous Fabio Quagliarella that was all Borucs, a wild shot by Vargas, a nice bit of defense by Camporese, two shots by Claudio Marchisio, one wide and one saved. On the negative side, Pasqual gave up 2 corners and kicked a counter chance straight out of bounds. The passing overall in this period was very sloppy for Fiorentina.

The last 15 minutes of the first half started out with Fiorentina pressing, getting a few corners, and a long shot that was easily saved by Storari. As the halftime break loomed closer, however, Juve had some serious chances. A free kick given on a handball called on Alessandro Gamberini at the top of the box required a sprawling save by Artur, and Marchisio hit the side netting on a fine service from Del Piero. Fiorentina had a chance towards the end of the half with a three on two, unfortunately Pasqual as one of the three and declined to give the ball up to a wide open Gilardino and shot it wildly into the crowd.

The second half started out all Juve with a corner and a Del Piero shot just wide, and then things began to go seriously wrong. Alberto Gilardino pulled up lame and had to be replaced by Khouma Babacar and that effectively ended the offensive portion of the Viola Show for the evening.

the 2nd 15 minutes of the 2nd half were mostly Juve's possession, but as a team, they really were slow and lethargic for most of the match, so the but of their possession was in the middle of the field. Babacar had a nice 1 on 3 drive but stumbled in the box and couldn't get a shot off, Marchionni came on for Ljajic, but had no effect and then our worst nightmare, new guy, Michele Camporese who had stood up with the best of them the last two weeks went down and had to be stretchered off. He did get up and limp off the field, but reports are contradictory, some saying just a cramp, while others say a muscle injury. Check here for medical reports Monday. Well, actually, NOW is when the nightmare started, because the only alternative left to Sinisa Mihajlovic was Felipe.

As the match went into the last 15 mintues, fatigue became a big problem, Vargas wasn't able to get back to help Pasqual and Krasic started to own him. On the other side, Comotto couldn't keep up either, and it was his inability that gave up the free kick that Simone Pepe scored on.

Prior to that, Boruc had hurt himself landing on his outstretched arm. Viola will say that Boruc was impeded, Juve fans will say great free kick. Boruc in fact says he was impeded, but I guess you can't expect that sort of call in Torino.

D'agostino had a free kick at the very last minute, but Storari parried it fairly easily. It was another heartbreaker for Viola fans, but to allow only two goals in Turin and Milan is a result we must be glad for.

Stats
There were a lot of shots flying around Stadio Olimpico di Torino, 24 to 9 in Juve's favor, but only 1 Viola shot was on, while 6 were on for Juve. Boruc's 5 saves were instrumental. Juventus out-possessed Fiorentina 62% to 38%. 18 fouls were called on Fiorentina, several of them on blatent dives in the ending minutes. Marchisio, Bonucci and Pepe got yellow cards for Juve, Pasqual and Comotto was yellow carded, along with Felipe's double yellow.

Report Card
Boruc - Epic, Man of the Match 8
Comotto - outclassed, old, slow yellow card got him suspended and led to the goal 4
Pasqual - horrible, can't pass, can't keep up, although he was up against a stud in Krasic. yellow card 4
Gamberini - did ok, handball in a dangerous spot led to nothing 6
Camporese - stood up like a man to the Juve front line 7; Felipe - good bye, you suck, i've seen better MLS defenders, red card, hope they suspend him 2 games so we don't get tempted 2
Donadel - fairly solid in midfield, got a bit tired towrads the end. 6
D'agostino - had a nice free kick, but had some issues with his passing, might have been field conditions. played back most of the match to cover for our weak defense. 6
Santana - not much of a factor, he played back a lot as well. 5
Ljajic - Had moments of brilliance, was pulled for Marchionni to bolster the defence 6; Marchionni- n/a
Vargas - second man of the match. when he's fit, he's an animal, got a bit tired. 7.5
Gila - a very brave effort, after the head butt, he was unable to fight for long balls from Boruc and the defenders and that took a lot from his game. 6; Babacar - didn't really get warmed up, but had a nice run or two. he still looks 17. n/a

Mihaj - Got the same result San Cesare took from Torino last season. seemingly doing it more and more with smoke and mirrors. it's not always pretty and we're not really succeeding, but we're not necessarily failing either. 7

Medical Report
Initial reports on Gilardino is that, pending a MRI tomorrow, it appears there is no tendon damage. If that is the case he would probably miss about 10 days, and could possibly be ready for the trip to Udinese. Reports on Artur Boruc are that he is much better today, but that all due precautions will be taken. Expect to see Avramov Tuesday. No further word on Michele Camporese, could have just been cramps, medical report to follow on Monday.

On the plus side, Adrian Mutu will be back for the next League match as well as Cristiano Zanetti

Looking Ahead
Tuesday at the Franchi will be a Coppa Italia match against Serie B side Reggina. look here for feeds.
Next Sunday Morning we play Cagliari without suspended players Felipe, Kroldrup and Comotto. Still time for Mihajlovics Fiorentina debut as a player?