A Calcio Classic - Juventus-Fiorentina - For Stefano

Share All sharing options for: A Calcio Classic - Juventus-Fiorentina - For Stefano 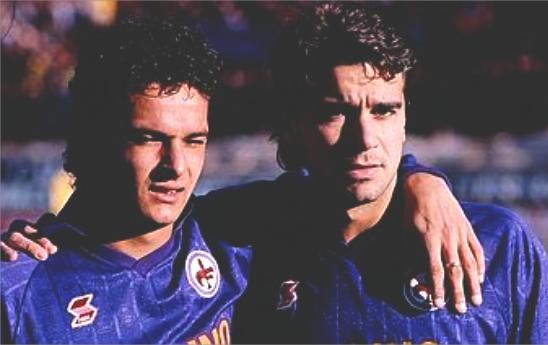 Its time for one of the most heated battles in calcio. One of the fiercest rivalries that spans decades, and one of the true classic matches of the beautiful game. Its time for Juve-Fiorentina.

I could use this space to explain the rivalry, the hatred between our teams and fans, the scowling and the cacliopoli and the bitter transfers. But I think this game should and should always be dedicated for Stefano Borgonovo, fighting a brave battle against ALS and a short lived but well remembered hero of this team. In the 1990 season he scored a last gasp goal against Juventus in a historic 2-1 win, and enjoyed a brief partnership with Roby Baggio.

Win, lose, or draw, we fight for you and the hopes of one day ending the terrible disease.

The game itself draws rivalry from several sources, the botched 1982 scudetto where Fiorentina were denied a righteous goal on the last day against Cagliari and Juventus were awarded a controversial penalty which handed them the scudetto on the last day of the season. The rivalry only grew through the 80's and into the 90's with the sale of beloved Baggio and full scale rioting in the city as well as a UEFA Cup final fought in Fiorentinas "home" stadium (the Franchi was suspended at the time) of Avellino, a traditional Juventino town where the black and white were given massive support. With the first leg a 3-1 bianconero win in Turin, the viola could only afford a 0-0 draw. In the 1990's the Viola-Bianconero battles went mostly in the old ladys favor, and can also be remembered for that spectacular volley from a young Alex Del Piero in a last gasp game.

In the 2000's, Fiorentina was regulated to Serie C and the classico was lost for some years, but under the Della Valle Fiorentina have come roaring back and in recent years have matched our zebrette brothers and even bested on several occasions.

One of the earliest and the most memorable came in the 2000-2001 season where a star studded Juve and Fiorentina including Zidane, Inzaghi, Rui Costa, Nuno Gomes and Enrico Chiesa played an intense 3-3 draw.

This was repeated in 2004-2005 season with an excellent young Giampaolo Pazzini just starting to make a name for himself.

After their run in Serie B due to calciopoli, Juve came back into the 2007-2008 season looking to take their scudetto back. In 2006 we bought Romanian hitman Adrian Mutu in exchange for sending Valeri Bojinov the other way. Their first chance came in Florence where Juve took a first half lead with a Iaquinta strike, but a Zebina handball gave the hometeam a 90th minute penalty and a Mutu conversion to bring it 1-1.

It was a bright day in Turin, Juventus were at the far reaches of the table, Fiorentina were fighting against Milan for Champions League qualification. We were without our in form Mutu who was out with injury and our chances looked slim against a achieving bianconero side. At '19 Jorgensen made a slalom through the midfield and in the box found a strangely advanced Gobbi (why our left back was in the box is beyond me) who took the ball and slotted it into the far post, 1-0 Viola. 10 minutes later, Juve had a freekick, it flew into the hands of Frey who was unable to control, pushing into an unmarked Sissoko who acrobatically put it into the back of the net. 1-1. Fiorentina go into the half feeling confident. Straight off the half, an unmarked, unseen Camoranesi runs into the box and from a yard slots it right under Frey. 2-1 Juve. At 62 minutes, Ujfalusi comes off and is replaced with Osvaldo, Prandels goes in all attack. 4 Minutes later he takes off Santana and brings on Papa Waigo. Shots are deflected from Pazzini and Montolivo and Buffon is tested but looks unbreakable. 15 minutes from the end, Papa Waigo comes in from the right side, he uses his lanky frame and speed to rush past 2 Juventinos, in a sliding but powerful kick he suprises Buffon and slots it into the far post. 2-2 and we have it in control. Juventus counter back with shots from Trezeguet and Palladino excellently parried by Frey. The minutes pass by, 90 minutes have passed, we're now in 90+2 Fiorentina are dangerously in the box, Pazzini controls and the ball bounces right by Zebina, he finds Papa Waigo on the right, Papa crosses, Osvaldo stretches his body a meter from the goal and in a beautifully executed diving header, the Argentine slams the ball passed a stunned Buffon. 3-2 magical viola. The team is celebrated as heroes and given an escort of fans and scooters from the aiport to the stadium.

Seen from the Juventino side:

In 2008 our season started with the classico. As one commentator put it, "Its like having your final exams on the first day of school." We wanted to see if our 35 million in summer investments were up to it. Mutu once again was missing replaced by Osvaldo. Juve took the lead with Amauri finding an unmarked Nedved at 38 minutes to open the scoring. Fiorentina fought a battle and controlled the game in the second half, and once again it took 90 minutes to set things straight. Pazzini lobs high to the new Gilardino, who controls it on one foot, and twisting around Mellberg, slides it in to the near post past Buffon. Gilas first goal in viola and a great show of skill.

Juventus Fiorentina in 2009 was an extremely controversial affair. Del Piero found Marchisio early on to make it 1-1. But a match refereed by resident Serie A scumbag Saccani, Gila was denied a clearly good goal held onside by Marchionni, and a penalty denied to Jovetic brought down in the box by Poulsen.

In the 2009-2010 season, Felipe "35 million" Melo was sold to the northern neighbors. We were incensed but we took it to them when we went to Turin. The match opened with an early goal as Jovetic running down the left found Vargas who pushed through two defenders and volleyed the ball right over Buffon. 1-0. But just before the break, a defensive flub by Gambero and Kroldrup left an open Amauri to slot it past Frey.

On the return leg, it wasn't even 2 minutes before Diego beat Frey on the ball and put it into the net. At 32 minutes, ex-man Marchionni found a header to bring us level, before Grosso brought the bianconeri into the lead in the 70th.

After the season finished we were invited to play a friendly in Toronto, where a spectacular long range JoJo strike sealed a 1-0 win.

And this brings us to tomorrow...

We go into this match as a makeshift but slowly improving team. Our game was only held back by an excellent keeping job by Abbiati but our midfield and our second half defense featuring youngster Camporese looked solid even (mostly) keeping out Ibra. We're still without our key players, but we might go in Arsenal style if we need to.

Juve are coming off a string of positive results and currently sit in 4th place, they've shown that their attack is healthy, defense still a little bit shaky, and a well connected midfield. Obviously the big danger here is Krasic who can fire a goal from anywhere he wants. If we're going to take this, its going to be an attack and keeper game. We can't afford to waste good chances, and leaving any of their attackers too open can be doom to us. The big gamble is Gila, who has run a gamut of hot and cold this season, how he chooses to play will make a big difference in this game.

Our formation is going to be much like the one that appeared against Milan. Boruc starts in goal, Comotto and Pasqual on the flanks. Center defense still has a huge question mark over it. Gamberini is finally going to start while Natali goes under the knife, but unfortunately Felipe is being favored over Camporese who will probably start the second half. D'Agostino and Donadel will run the midfield while a not-so-in-form Vargas will suprisingly start from the bench and be replaced by Santana. Cerci and Marchionni are in competition for the other side with the ex-man being slightly favored just behind Ljajic who will cover Gilas shoulders.

Del Neri's squad will have ex-man Storari between the posts, protected by Sorensen, Bonucci, Chiellini, and Grosso. Krasic, Felipe Melo and Marchisio in mid, and a trident of Marchisio, Iaquinta and Quaglierella. Quags is on a hot streak and will be tough to contain, especially on Felipes side, the defense doesn't worry me as much as it should, but we just have to hope that our attackers are accurate this time.

Juve are 9 games unbeaten and we have trouble on the road, but if we can pull a draw then it'll be smoother sails from here until Christmas where we can hopefully make some much needed recoveries.

Lets be respectful towards each other here. If any of our bianconero brothers are reading this. Please keep your comments here respectful, we're not ultras and we all hope for a good and entertaining match as a great match up like this should be.

This is Juventus Fiorentina: Its not over until the ball stops rolling