Share All sharing options for: Kept It Interesting - Milan 1 - Fiorentina 0

Even my cat was riveted as a battered and bruised Fiorentina squad gave Milan all they could handle at a damp, cold and slippery San Siro Saturday.

It took a moment of distraction by the Viola and a moment of brilliance by Zlatan Ibrahimovic to score the lone goal of the match and give the Rossoneri the 3 points and insure that AC Milan will retain their lead at the top of the table. Another patchwork lineup was put into play as regulars Jovetic, Mutu, Frey, Montolivio and Gamberini were unavailable.

Fiorentina weren't without their chances, as Christian Abbiati, the AC Milan netkeeper, was required to make 5 saves, and despite the Ibra moment, was the Milan Man of the Match for me. Both squads got 6 shots on, but Milan had 18 shots to Fiorentinas 10.

The match started out with a bang as Bonera got a shot on in the first minute that Boruc had to sprawl out to save and Fiorentina answered back in the 7th minute as Abbiati robbed D'agostino's free kick that was heading for the top corner of the net. The Goalie duel continued through the first half. Abbiati tipped a Kroldrup header over the bar at minute 18, Boruc parried a Seedorf blast around the half hour mark.

At minute 40, Robinho put a ball in the back of the net, but he was called for offsides. Four minutes later, however, Ibra didn't make the same mistake.

I think most Viola would agree that most of the fault for that goal lies with Comotto and his weak attempt at a steal, but Artur Boruc really looked a bit lost on the play. Ibra tried to emulate Bill Gramatica on the celebration, injuring his arm with his wild gesticulations, but managed to make it out for the second half. 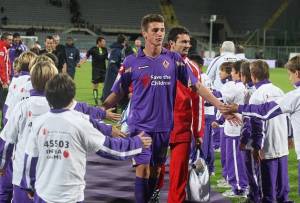 In the second half, a breath of fresh air came on the pitch for La Viola in the person of 18 year old Michele Camporese. Cesere Natali had done a good job on Ibrahimovic, other than the goal, Ibra really didn't do a lot in the match, but Natalis foot problems did not allow him to continue, so the lad was brought on for his Serie A debut and did not disappoint, and looks likely for a start in Turin next week.

The second half was a back and forth affair with both sides having chances, but neither capitalizing. Santana was brought on for Marchionni in the 63rd and made a small difference, but Juan Manuel Vargas made no difference at all when he came on in the 76th minute, and the match ended at 1-0.

It could have been much worse, but it could have been better as well. The loss, added to sundays morning results, only dropped La Viola one place to 13th, depending on the Napoli v Bologna result.

Report Cards
Boruc - 6 saves, some of them very acrobatic, but looked a little lost on the Ibra goal and i still don't get the comfortable feeling i get when Frey is there 6.5
Comotto - up against tough opposition in Seedorf and Ibra. not sufficient 5
Pasqual - can't get crosses past defenders and when he does they're not effective, too slow getting back, he really shouldn't be starting, need a better solution in that spot
Kroldrup - had a good chance at goal with a header, played well in defense but his bonehead choice of getting thrown out puts the team in a tough situation for next week. for that alone he gets a 4
Natali - had Ibra covered like Ronaldinho's spandex disco gear the first half, Ibra was almost invisible. The one moment he drifted to cover someone else cost dearly tho as Comotto was unable to cover. 6; Camporese - looked very promising. calm in defense, nice passing, almost freed up Gila for a one on one, but Gila couldn't stay on sides. 7
Donadel - heavily ovematched by the three Milan thugs. Gattuso made him his little bitch most of the time, but he gave it his all as always. 6 for effort
D'Agostino - Looks great on free kicks and has what the Fox announcer called a very cultured foot and seems strong on the ball, but he's still rusty. can see a brighter future with him 6
Cerci - lost two balls in his first two touches but settled down some. had a good cross that Gila weakly headed out. I see him as more of a sub to bring energy on; Santana - he came in on the left and moved March to his normal right side. instantly brings energy to the attack. 6
Marchionni - put on the left for Vargas and is ineffective there, was a little better when he moved to the right. holds the ball too long and can't cross at the moment 5; Vargas (at min 75) horrible. asleep, slow, should've stayed in Peru 4
Ljajic - Was over matched and beat up by the more experienced and larger Milan midfield in the first half. he played better in the second half, but it's still a learning experience. Had a chance to be the hero, but shot it straight at the goalie. 5
Gilardino - 4 or 5 offsides called, he really looked like he was in his head about being back at Milan. had a good setup for Ljajic. 5

Mihaj - I think he's starting to get the team thinking and playing in the manner that he wishes. With the exception of the Roma match, only two goals given up in 5 matches is what I think he's looking for. Offensively, the team is still struggling, but given the constant lineup changes he's had to contend with, that's only to be expected. I'm starting to be a Sinisa Believer. even with a loss, i'll give him a 6.

Looking Ahead
Next week in Turin we can look forward to no Kroldrup, and with Natali in London seeing a specialist, it looks likely that Camporese might get the start, hopefully paired with Gamberini. I'm not sure what is going on with Lorenzo Di Silvestri, but i think the Comotto era has to come to an end soon, he's a sub at best. Vargas will be back and rested, so we'll see. Juve hasn't shown themselves committed to the Europa League in any way, shape or form, there's no reason to assume they'll do otherwise, even though they have what could be their last shot the Wednesday after our match. They should field their A squad against us. Game time is 2:45pm est on Saturday. should be televised as well.

Looking Far Ahead
the first match for Camporese had me looking a few years ahead where we might field a line up that featured a back line of LDS, Gamberini, Camporese and Gulan, which could be quite solid. Right now we're in the New Dark Ages (nod to Bad Religion) but i think if we hold the course and keep on, things will look up.

Poll Question
With more than a third of the season complete, it seems appropriate to ask this question now:

Given exactly the same circumstances (injuries, suspensions, etc) would Cesare Prandelli have achieved a better record/place in league and tell me why/how.