Share All sharing options for: Tune the Violin, We're going to Milan: Milan-Fiorentina 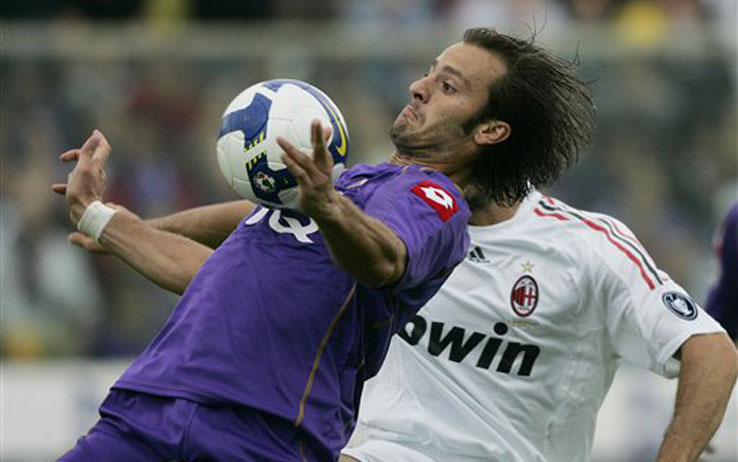 Pack your bags, wear your best. The purple is going to attempt to rock the San Siro.

So recently we've been looking slightly better. Our good performance in Rome was only rocked by a Boruc howler, and we took it 1-0 to Cesena with a classic Gila strike who recently has rediscovered both his home and away form. Will it last? Lets hope. So we're up against the Team Formerly Known As Beckhams. Both of us are missing key players in key positions but us much more than them. The big question is who our defense is going to be and who is going to start. The last positive result we had here was a 1-1 draw back in '07 with a Kaka penalty and Mutu equalizer.

Milan-Fiorentina is almost as big a rivalry as against Juventus, we have big ex-man Gila, and we still haven't been forgiven for the Champions League snub in 2008. Its always been a very tight packed game producing few goals but plenty of midfield and defensive action.

So D'Agostino is looking fully healed and should be taking Montolivos place, Vargas picked up a knock during the week and should start from the bench. Zanetti is still missing. Gamberini and Natali are both having their issues and at least one will start. Don't expect Camporese to start though, the spot will go to either Kroldrup or (gulp) Comotto. Mutu's 2010 of doom continues with yet another injury and will be out for the next 3 weeks. Jovetic has returned to Munich for a followup and Montolivo and Frey are both recovering comfortably.

Milan are going to be without frequent Viola scorer Pato, Inzaghi, and Pirlo. Unfortunately Ibra scores just as much so it'll be up to tall man Natali to stop him. Abate is suspended.

The good guys are going to show up with a 4-2-3-1, we have Boruc in goal, Comotto, Kroldrup, Natali (Gamberini?) and Pasqual in the back, Donadel and D'Agostino will make up a tough midfield which might be the key to this game, If D'Agostino can get enough space he can be deadly. In-form Santana is preferred over Marchionni, with Ljajlic and Cerci on Gilas shoulders.

The devils will have Abbiati in goal, Bonera, Nesta, Thiago Silva, and Antonini in defense, Gattuso, Flamini, and Ambrosini in mid, and Seedorf behind Ibra and Robinho. Ronaldinho will start from the bench on this one.

So like I said the midfield is going to be the key to this game, giving D'Ago lots of space and letting Donadel take back possession, something hes been well adapt with this season.

Lets hope for an exciting game, and be a little optimistic about this one!