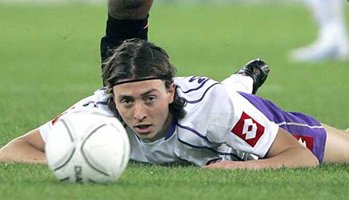 Today in beautiful Florence, Fiorentina were schooled in every aspect of the game by a much better Palermo squad.

Of course, that praise for Palermo means nothing, since it seems every squad in Serie A is better than Fiorentina so far

La Viola put 10 guys in the offensive half and paid for it by being gashed by counters time and time again. Even Superhuman Sebastian Frey was merely human as he was outplayed by the Palermo goalie, 4 saves to 2.

First goal was an awesome strike, but Zidane made him look silly on the second goal

The one bright light for Fiorentina was Mario Santana who came on and crossed a ball that not even Gila could miss on for the lone purple goal, but Captain Montolivio followed that up shortly with a red card which ended any hope of a result.

Report cards
Donadel gets a 5 for effort, Santana a 6 for a perfect cross and every one else gets ZERO. Nada. Nothing. they were all crap. They couldn't string more than two passes together most of the match. They walk back practically every time they go forward. Frey hardly even looked himself except for one or two saves. Monto looked horrible, fueling conversation that he should probably just get the surgery. I'll give gila a 1 for not pulling a nacho on a ball no one should've missed on.

Mihajlovic gets a -2 for starting Marchionni out of position AGAIN, although I'll give him those 2 pts back for finally putting Santana in. so he gets 0 too. Unless things change, he won't be the coach we end this season with.

Moving forward
International break these week. hopefully this gives D'agostino time to heal as Monto will not be available next match. Shouldn't be more than a one match ban.

Oct 16th we come back and travel to Sampdoria. wow that'll be a lot of fun as well.

We have about 4 weeks til Mutu makes it back.