Share All sharing options for: Battle of the Ex's part II- Sampdoria-Fiorentina 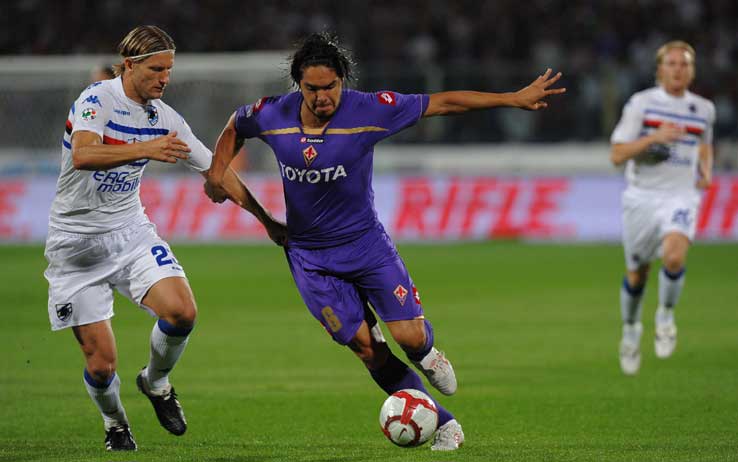 And we're back. Less than a week after Serbian hooligan scum tore up the Marassi, we're back to face Sampdoria, and a game like this could not come at a worse time.

This is battle of the ex's part II. Part I we successfully held off a decent Parma side and took a 2-0 win. This time we're up against Zauri, Semioli, Palombo and of course our former golden boy and Montolivo bff Pazzini. Last season we took the brunt of it, suffering goals from Pazzini AND Semioli (who never seems to score except against us). We're in a moment of deep deep crisis, from all angles, and i'll be curious to see what this team has in store.

So lets start from the top, we have injuries in every part of the team, some deep, some just coming out. Our midfield is basically decimated, and same with our defense (or the supposed "defense" that we have) Starting with the everpresent Frenchman between the posts, Miha is looking at a new 4-4-1-1 formation with Ljalic much more advanced next to Gilardino. The idea is to use Comotto and Felipe (cover your eyes now) on the flanks and Gambero and Natali in the center, I actually like the Shrimp and Christmas pairing, both tall, and I don't underrate Natali. It is not said though that LDS, Pasqual, and Kroldrup could fill in any of those spots though. Midfield is our biggest issue at the moment. A possible move could be Vargas on the left, Cerci on the right, and Santana filling in next to Donadel. Meanwhile Zanetti will fill the role of this weeks waterboy. Up front we will see Ljajic and a hopefully improved Gila.

Samp is valuing the conditions of Gastaldello and Tissone and Pozzi are training apart from the team. Samp will field Curci between the posts, a defense of Zauri, Volta, Lucchini, and Zeigler, in midfield, Semioli, Palombo (Tissone?) and Koman, with the deadly Pazzano pairing up front. Its no wonder who our threats are here.

-Frey reveals he never had a strong relationship with Prandelli, is upset about not being called up for the national team, and wants to remain in Florence another two years.

-Mutu is only 17 days away from returning, in the meantime he has become the owner of a restaurant in Florence and will become a father for the 4th time.

-The damage to the Marassi is valued at 80,000 Euros but will be ready in time for the match.

-Fiorentina played a match against the junior team, Babacar scored 5, with other goals coming from Gila, Marchionni, and Papa Waigo.

-Incredibly, Fiorentina has the best 2nd half defense and has only taken one goal in the second half (Kozak against Lazio)

-Savio is still missing and has not been heard from anyone, rumors range from his brothers supposed death in Uganda, to financial issues.