A Dialog Between a Father and Son

Share All sharing options for: A Dialog Between a Father and Son 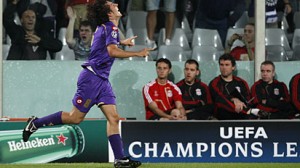 SCENE: A 34-year-old man and his 15-month-old son sit together on a couch. The boy holds a stuffed duck named Mr. Quackers. They have both just witnessed their favorite football team, Fiorentina, dismantle another football team called Liverpool in a competition called the Champions League. Following the final whistle in the match, this is what they discussed…

FATHER: And that, my son, is what being a sports fan is all about. You’re very young, and you don’t understand all this, but you just witnessed a very big event. It’s not quite as big as some people say, of course. I have already heard one person say that it is the greatest win in the Viola’s history. Of course it is not. This team has won scudettos and cups, you know. There have been bigger matches. But we beat a very good team, with very good individual players, in a European competition. So it is very big.
Yes, I know what you are thinking. The media hype that surrounds these English teams is ridiculous. No team is as good as the English hype. Nor is any Italian team as bad as the Anglo-centric press says. But hype aside, Liverpool is good, and their captain Steven Gerrard is very good, and their wonderful striker Fernando Torres is very, very good. Great, perhaps. Although our central defender, Alessandro Gamberini, was even better today. As I said, today is a special day.

FATHER: Indeed. But, as I was saying, this is what being a fan of sport is all about. Not all days are as good as this one. You have already sat through too many grim 1-0 losses to the Romas and the Samps. But that is what you must do to be a true fan. You cannot just appear for the wins. You must suffer through the losses, to truly savor the wins. And tonight is a time to savor. The entire team played magnificently. I have no complaints tonight. The defense held a very strong team. The midfield controlled the ball. We scored twice. The first half in particular was perhaps the best half I have ever seen my team play. It is a wonderful feeling.

SON: [Pointing at his father]: Daddy!

FATHER: Yes. I am your Dad, and I love you above all others. There is no one near you.
But I confess I have paternal feelings for that boy Steven Jovetic as well. He is only 14 years my junior, and I have only watched him since he signed with out favorite team, but I feel like we have watched him blossom from a boy with promise to a man who dominates football games. Never mind his goals, although he took them with the cool of an assassin. But note, instead, how he dominated the match from beginning to end, how he sprinted from the first minute to the last, and how he above all terrorized the experienced defense of Liverpool. I am proud of him, not just because I have backed him for so long, but because he has grown and transformed into something else. He is becoming a great player before our eyes.

FATHER: Of course I will not overlook the other members of the squad. They played as a team today, and I am proud of all of them. Our defense kept them out. Zanetti played like the wily old lion that he is. Mutu ran and ran and ran. I have criticized Marchionni and Montolivo in the past, but they were part of the team tonight. I have nothing bad to say of them.
And the coaching. You know my thoughts on the Great Man. However he prepared them in the first half, it worked. They destroyed a team that, in theory, had superior personnel. Fiorentina just took them apart. In the second half our boys sat back and defended, and you saw that it made me nervous, but it worked. We kept them out. I would trade the Great Man for no other manager.

FATHER [puzzled for a moment]: What? Ah, yes. You are right. We are back on the Champions League “truck.” The group is now wide open. And if one thing is clear, it is that we can beat anybody. We can beat anybody in the group, anybody in Italy, and perhaps anybody in Europe. We showed it in the first half tonight. We control our own destiny now.

SON [Pointing at the stuffed soccer ball they had kicked around together at halftime]: Ball!

FATHER: Your right, son. It is a simple game. Just men kicking a ball around, trying to put it in a net. So simple and so complex. And yet it brings us so much joy, this simple act. We suffer and suffer, and agonize and scream, and in just 90 minutes it is all made worthwhile. I’m just glad I was able to watch it with you. You’ve never been to Beautiful Florence, of course, except that you have. Your mother carried you through the streets of that most beautiful city before you were born, as she and I again visited the beautiful churches, and the museums, and the wonderful restaurants. You even visited the Artemio Franchi, the same place where the game was played tonight. You don’t remember it of course, but you were there with me.
And therein lays the true beauty and power of football, the power to bring a father and a son together, to watch and cheer a team that plays a match thousands and thousands of miles away. You will understand this all much better when you are older, my son; for now I am just glad we could be together to watch this.

FATHER: I guess I am being silly talking to you like this. You are still just a baby. I just like talking to you. What could I expect you to say?

SON: Well, sorry I was so quiet. I was just thinking about how we have to beat fucking Lazio this weekend. What were you saying?