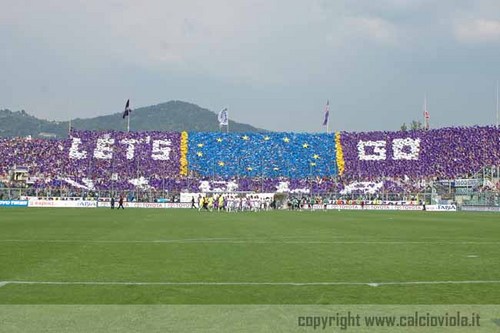 This match is a real opportunity for Fiorentina. So far, there really aren't any signature results fans can point to from this competition. We know that the squad has the ability to produce wins against top teams in Italy from time to time (Roma last year, at Newcastle the year before that, etc.), but the Viola have consistently been a step short when it comes to games against top competition. Liverpool have been excellent in the CL for several years running, but something tells me they are in for a tough match tomorrow night at the Franchi.

1) Jo-Jo is about to get paid. Hopefully this prevents the vultures from circling, until the summer time at least. He's started to show his quality this year, and I'm still of the opinion that we are watching the start of something truly special (and not just a spectacular mullet).

2) The Scousers will be without Mascherano and Benayoun tomorrow night. This is great news because Benayoun is criminally underrated, and he's clearly Liverpool's most creative player. Also, it is excellent news for the shins of Mutu, Jo-Jo, RickyMonty and anyone else The Great Man deploys in the center of the park tomorrow night because Mascherano is one tough bastard, and a top defensive midfielder to boot.

3) The Great Man is fired up. The atmosphere at the Franchi tomorrow evening should be awesome. So far, the stories that have been out there have shown a good rapport between the two sets of supporters, and I've got my fingers crossed that the overly-apprehensive Fiorentina supporters are able to put that to the side and really get behind the boys tomorrow night. They're going to need it.

Fiorentina got the win on Saturday against Livorno, while managing to rest several key players. Specifically, Gamberini got to save up his energy to try and handle Torres, Donadel didn't go a full 90 so hopefully he'll be ready to shadow Gerrard and Jo-Jo and Mutu split time so they should be ready to go up top.

I believe Fiorentina can and will win this match, and here's how they'll pull it off:

1) Donadel will chase and hassle Gerrard all over the pitch, preventing him from taking control of the game and Liverpool won't have many options to unlock the Viola defense without Benayoun.

2) Gamberini will be rested and ready, so he will, gulp, prevent Torres from scoring more than 1 goal (its going to take at least 2 for the Viola to win this one).

3) Liverpool's defense is a shambles - they aren't shutting people out in the EPL matches and the only central defender slower than Dario Dainielli is Jamie Carrager. If I'm Jo-Jo and Mutu, I'm licking my lips.

5) I realize that Rafa Benitez has a pretty impressive C.V., but The Great Man can match wits with him any day.

6) Despite all of the turmoil (Paolo Bandini both wrote and spoke about this at length today), Fiorentina are 2 points off of the top of the table and would be in great shape to advance in the CL with a win at home tomorrow night. Prandelli will have the boys ready, and its going to happen.

7) Mutu will step up - he's had a rough go, and he will relish the opportunity to come through on the big stage against English opposition.

Fiorentina: (4-2-3-1): Bassy; Gobbi, Gamberini, Dainelli, De Silvestri; Donadel, RickyMonty (time to step it up and his swag is phenomenal against teams from Liverpool); Vargas, Jo-Jo, Jorgensen (This might be Marchionni but I'd like to see the old Man); Mutu.

Liverpool: This Liverpool blog says these guys got on the plane: Reina, Cavalieri, Johnson, Skrtel, Carragher, Kyrgiakos, Aurelio, Insua, Lucas, Spearing, Plessis, Kuyt, Gerrard, Voronin, Torres, Babel, Riera, Benayoun. So, 11 of them, most likely including Reina in net, that big slow idiot Carragher, Lucas (he's sorta the Brazilian RickyMonty from all of the criticism he's gotten recently), Gerrard and Torres.

Fiorentina 3 - Liverpool 1. Goals from Mutu, Ricky Monty and Jo-Jo for the good guys, and Torres for the Scousers.