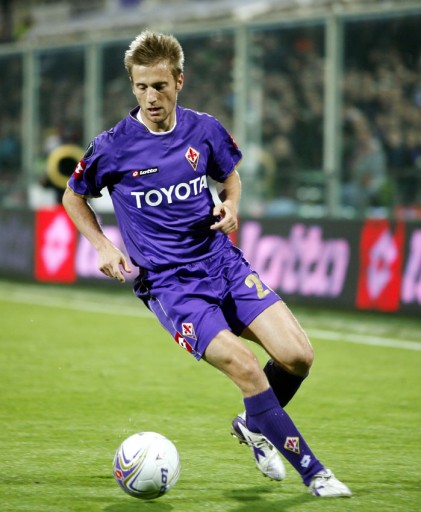 What's happening? Fortunately for our boys in purple, they don't have far to go for tomorrow evening's match at Livorno. It will be a short bus trip, but there are plenty of memories of poor results on the road against inferior Tuscan sides in recent season to make any Fiorentina supporter nervous.

Livorno have been terrible up to this point this season. They have 2 points from the first 5 matches, both 0-0 draws at home (against Milan and Cagliari). They've been soundly beaten on the road 3 times, by Bologna, Newcastle and Napoli. Livorno don't have too many players to be scared of, as their most notable threats are the captain Tavano up front and everyone's favorite aging socialist striker, Cristiano Lucarelli (he's the leading scorer, with the only goal for Livorno this season). Either way, they will be hungry for a win to try and lift themselves out of the relegation zone.

Fiorentina were roundly praised for their performance against previously unbeaten Samp on Wednesday night. However, from watching the highlights, Samp did create several chances early in the game, but as usual, Bassy was up to the task. Still, the spirit showed by the players after the abysmal performance against Roma was very encouraging. I'm not sure what to make of the impact the resignation of Andrea Della Valle will have (Cesare ain't scared), if any for this weekend's match, so let's leave that to one side for now.

I'm guessing there will be some changes to the starting lineup, partially because this game is only 3 days after the previous one, and also with one eye on the big upcoming home CL match against the Scousers on Tuesday. I think this is one match where Prandelli could get away with resting Gamberini if he thinks this is necessary (keeping him fresh to handle Torres seems like a good idea to me), and maybe the non-defensive holding midfield would work against the impotent Livorno (Zanetti and RickyMonty to save Doandel's legs to chase Gerrard on Tuesday). Also Vargas may have to be managed due to his heel problem and maybe Marchionni won't start either. We know that the Gila Monster will get the start because he's suspended for the Liverpool match. Whoever Prandelli decides to put out there, the key will be to try and get a goal in the first half.

In the USA, this game will be broadcast live on FSC at 2:30 EST.

I see the strong play continuing and I'm looking forward to a comfortable 3-0 win with goals from Jo-Jo, Jorgensen and RickyMonty.