Viola Try to Right the Ship against Visitng First-Place Samp

Share All sharing options for: Viola Try to Right the Ship against Visitng First-Place Samp 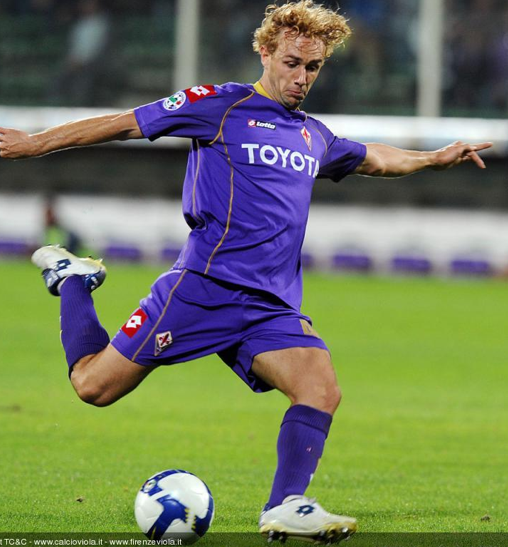 Well, I'll start by saying that I gave up after watching the first 45 minutes on my DVR on Sunday. It was a beautiful day here in DC and I was spending time with my family so I couldn't watch the match live. I was hoping to cap off a great weekend by witnessing a strong performance by the Viola, but the Olimpico remained a house of horrors and nothing went right. Fortunately, the boys didn't have to wait too long for an opportunity to turn it around. However, Samp are flying right now and will bring an in-form Cassano and a highly-motivated Pazzini to the Franchi. It should be quite a match.

Right now, I think there are 2 major problems that I'd like to see Prandelli correct:

The Defensive Midfield is not getting it done:

The second and third goals were the direct result of abysmal marking by the Viola. It isn't exactly a secret that Roma's best player is not a genius and wears number 10. Also, his coach had made a big, public, deal of telling him to drop back further into the midfield to vary his approach in the build up to this match. Also, that guy De Rossi is capable of finishing in a spectacular fashion if he's allowed space in front of him to shoot or run into the box.

Let's face it, Fiorentina miss Melo. Also, the pair of Zanetti and RickyMonty are not going to excel at the defensive aspects of the holding role in Prandelli's 4-2-3-1 formation. These guys are better at passing the ball, and are more playmaker than destroyer. I'll disagree with Ted about my man Marco Donadel. There are plenty of things he isn't, but he is absolutely a player who can handle his defensive resonsibility and break up plays. Of course, he's a card magnet and isn't particularly accurate when passing over long distances.

Here's my solution - when Fiorentina are playing a team with dangerous attacking options, Donadel needs to start. The RickyMonty and Zanetti combo will suffice when the Viola are facing crappy Serie A teams, like Palermo (ok, not really like Palermo but I thought I'd try to rile those ass clowns up for no apparent reason). Otherwise, Donadel needs to play to add defensive cover because Dainelli simply is too vulnerable.

I don't know what to make of Mutu right now. Ted brought it up in the previous post, and we've all grown sick of reading the stories about this perilous financial situation and his struggle to maintain fitness (added to the fact that he simply has not stayed healthy for the past couple of seasons and is now on the wrong side of 30 and therefore not likely to ever do that again). If we're going to get what we need out of him (goals), he needs to be deployed as a striker, either alongside or just behind the Gila Monster.

This means that for the big games, the 4-2-3-1 is not going to work. I think Prandelli should tweak it to something closer to the 4-3-1-2 used last year to great effect when Mutu and Gila were both healthy. I do agree with Ted that Marchionni has been lackluster and that Santana is probably best used as a substitute. Also, I have not seen it discussed widely enough: Juan Manuel Vargas has been the most impressive member of the team up to this point, and he was sorely missed on Sunday (the only person who could really challenge him up to this point has been Jo-Jo or Bassy, but I've grown used to Bassy being a beast).

So, here's what I want to see tomorrow. Vargas will have to play a bit further back, but have the most license to get forward in the bank of 3 in front of the defense.

Bassy; Pasqual, Gamberini, Dainelli, Comotto (please De Silvestri, get healthy soon - he should be in the squad at least tomorrow so we'll see an alternative before too long); Vargas, Donadel, whichever one of Zanetti or RickyMonty has looked better in practice; Jo-Jo (It's time to hand him the keys); Mutu, Gila Monster. Santana and Jorgensen should stay ready to come in off the bench, and maybe some sub minutes out of De Silvestri would be nice.

This is long already so I won't go on too long about Samp. They're very good right now. Watch out for Paolombo, Cassano and Pazzini. Unfortunately, Franco Semioli can't play due to injury, so we will miss out on facing a winger who cannot score any goals and has the 3rd worst soul patch in Italy. There is some more real information here.

Looks like FSC is showing the teams from Milan tomorrow, so we'll do our best to try and find a stream.

I think the good guys get it done - 2-1 with goals by Jo-Jo, Donadel on a long range rocket and Pazzini on a header from a cross by Cassano.