Share All sharing options for: Viola Thumped by Roma 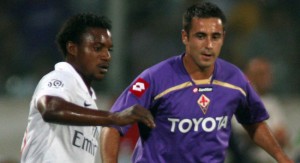 Christ, tough week for the sports fans in my house (and by that, I mean me and my 15-month old son; my wife could care less). I watch my beloved Viola lose on a shaky red card mid-week. I realize Kevin Garnett’s knee is still basically mashed potatoes. My old college basketball team is looking like its about to put up another year of mediocrity. Everything was supposed to be redeemed today, however, especially since my wife was taking the kid out for the day and I was going to get some uninterrupted time to veg and watch sports. So what happens? The Patriots lose, I lose in Fantasy Football for the week, I get bounced form my fantasy elimination league, and worst of all, in the MAIN EVENT of the day at the house, the one thing I had been looking forward to all week, the Viola loose to Roma. And loose ugly. Shit. Time to flip the calendar tomorrow, for all of us, and start another week.

I’m not sure what to say about today. Things did not look good. I feel like we simply couldn’t control the ball in the middle, and that the midfield was one step behind everything. We really missed Felipe today. I feel like the backline was actually pretty game, but they’re always on their back heels because of the problems in midfield and Gamberini, especially, is always trying to do too much to cover the errors of others. Regardless, however, I am not going to bitch too much about today: we simply got beat up. We’re going to have to get better, somehow.

Here are a few other thoughts from the game:

• I am done with you, Marchionni. I am done. You cross the ball like a blind man. You are a zero threat in the box. You scare no one. I am through waiting half a season for players to “come around.” We do too much of that with Fiorentina. He is a bench player at best. Make the move now. (Even if I hardly like Santana any better. And I don’t.) With ether of them up front on the right, you will not beat the good teams in Italy and certainly not the big clubs in Europe. Marchionni is quickly becoming my anti-Jovetic.

• Mutu hasn’t shown me much so far. Yes, I know he’s hurt, etc. And I was certainly the first to applaud the Great Man last year when he refused to sell him to Roma. We needed to keep him if we were going to be a Champions League-caliber team. But…have we held on to him too long? As my English friends say, past his “sell-by” date? This bears watching…

• I like Zanetti, personally and as a player, but he is not an adequate replacement for Melo. And neither is Donadel, when he plays. (Donadel has his strengths, but he is not a midfield destroyer.) We’re going to need to figure this out right quick.

• Montolivo. Ricky, my boy. Did you play today? Did you play a game of football? Or did you stand in the field again, looking at all the men in the colorful shirts, and watched the pretty banners wave and wondered where all the smoke was coming from? I wonder, Ricky, because you seem to be just like my son, and he is a little baby. Sometimes he does wonderful things, and seems incredibly precocious for his age; almost a genius. But then he can become distracted, say like when Grover comes on Sesame Street. He loves Grover. He drops everything and just points at Grover. You remind me of my son, Ricky. (By the way, Ricky: generally it is not good to be compared to an infant. Just so you know where I am going with my little analogy.)

We have Samp and Livorno coming up. Boy would I like to see 6 points from the next two. I am discouraged right now, as a true fan should be after a thumping. But take heart, everyone. The next match is always around the corner. Forza Viola.