Share All sharing options for: Deja Vu All Over Again - Viola begin CL Campaign at Lyon 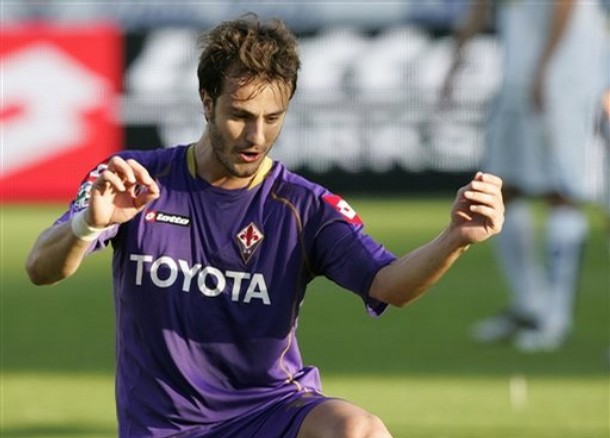 Ok, time to play these guys again. While the Viola have not made many major changes to their squad ahead of this year's campaign, Lyon decided to clean house after they finally did not win the French Championship last season after a streak of 7 in a row. Cesare has warned the Viola that the current Lyon squad is even better than last year's edition.

This was really a game that got away last year, with the Viola wasting 2 first half Gila Monster strikes with some shaky defending and even shakier refereeing decisions allowing the French guys to draw level. Those 2 points dropped really got the Viola off on the wrong foot, and for my money they never really recovered from that in last year's group stage.

For today's game, it looks like Mutu will be available as a sub, and Cesare will have the rest of his first 11 available, aside from Zanetti who will be serving a suspension due to yellow cards. This means that Donadel will slide into the holding midfield with RickyMonty (trying a new nickname in an effort to change his luck). This means that there will be a lot of pressure on RickyMonty today to shoulder the playmaking load. We know he can do this, and hopefully with Doandel alongside him to do the dirty work, he'll focus less on fouling guys in an effort to win the ball back and focus more on picking out his teammates. I know we're all sick of the roller coaster performances from him by now.

As for Lyon, look, they're good. They're pretty tough to beat at home. They rolled through the CL qualification against Standard Liege of Belgium, but that's an easier draw than Sporting. They are off to a good start in Ligue 1. I don't have much more on it than that because my awareness of French Ligue 1 is limited to checking up on my boy Chuck Deezy, on account of his Boston College affiliation and the fact that he's now a key player for Gli Statti Uniti.

UEFA preview has a few more details on Lyon.

Fiorentina: Bassy; Comotto, Gamberini, Dainelli, Gobbi (he's started all the CL games so far); Donadel, RickyMonty; Marchionni, Jo-Jo, Vargas; Gila Monster. I think we'll see Mutu get some time as a second half sub, probably for either Vargas or Jo-Jo. The thought of Santana coming on and running at tired defenders is exciting as well, though I'm sure he'll just screw it up once he gets into the penalty area.

Yeah, FSC doesn't have this very high on their priority list, despite the fact that it'll probably be one of the better games today. They're carrying on ESPN's pro-England bias, showing Liverpool against those Hungarian guys at Anfield. Unless the Reds decide to pull an Atletico, that won't be a particularly interesting game. If you got that DirecTeeVee - Slakas says you can find this live at channel 460something. And, as Ted pointed out, Slakas is a man who can get things. But for those of us who don't have that DirecTeeVee and don't want to wait until 5pm EST Thursday to watch our boys, we'll do the usual exchanging of streams in the comments.

Well, Lyon are far too strong for us to hold them off of the scoreboard, but the boys should have some confidence based on last year's performance. I'll go with a 2-1 away win for the Viola, with goals by the Gila Monster in the first half and Mutu in the second half. I'll say that Cris will score for Lyon because he's got a sweet name.

Forza Viola and let's hope the boys get this CL campaign off to a good start! Also, I'd like to reiterate Inara's plea to keep things civil in the comments.