Share All sharing options for: Palermo Recap and News Updates 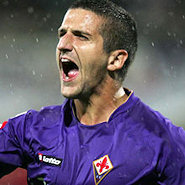 What's happening everyone? I'm filling in for Ted because he's on an emergency business trip - so the Palermo recap stuff is going to be short since I'm going from memory and didn't take notes while watching the game.

Fiorentina absolutely wiped the floor with the Sicilians in the first half. Jo-Jo was the best player on the pitch (he was for the whole game, not just the first half) and hammered a shot off of the post after he had beaten Rubinho clean from Zanetti's through ball in the first 10 minutes. Then the Gila Monster and Santana contrived to botch a clear goal scoring chance a few minutes later (I know, absolute shocker taht Santana was too cute in the 18 - but it was good to see the man back out there). The good guys came through in the 29th minute when Jo-Jo buried Comotto's driven cross into the lower corner past a helpless Rubinho.

Palermo were largely ineffective, with Pastore's languid passes often failing to reach their intended destinations and the dangerous tandem of Miccoli and Cavani seeing little of the ball. Without the help of the post and some heroic defending from Kjaer, the visitors would have been down 3 at the half. It is easy to see why so many clubs are interested in the big dane Kjaer, as he was excellent all game. Even though he tries to distract you from the fact that he looks like he's 12 with several crappy tattoos on his arm, he's clearly a force to be reckoned with and will move on to bigger and better things before long.

Palermo were much improved after some time in the locker room with the clearly very salty "Coach Z". They created several chances to score, and Gamberini and Frey (with a bit of luck to be quite honest) performed their usual heroics to keep the visitors off of the score sheet. I think the 3 points were a fair result but I also think that Palermo were unlucky to be shut out considering the number of chances they created in the second half - I'm thinking specifically about the free header that Budan sent over the crossbar.

Overall, Jo-Jo was fantastic, Frey looked much more confident than he did against Sporting, Gamberini was a rock, Zanetti showed his passing brain, Santana looked decent before tiring as could be expected in his return and Donadel did well to break up plays and even made a few nice passes. At this rate it looks like a shutout will be a rare thing for Viola fans - so we should enjoy this one as we enter the dreaded international break. Now, onto a detailed news roundup.

Our best player (when healthy) has been going through quite a lot recently - trying to get his fitness right after the injuries and surgeries and of course dealing with this Chelsea fine. Obviously we are in support of him as Viola fans, so I'm not going to go into a long discussion of why this fine is ridiculous and I'm also not going to be a racist in my blog posts like some Palermo bloggers.

I'm a huge fan of the Guardian's Football weekly podcast and the last 5 minutes or so of the latest edition include an extended discussion of our man Mutu's situation. It's well worth a listen to hear some unbiased observers try and reason through the situation. Also, as an attorney, I've always wondered why the fact that Chelsea did absolutely nothing to mitigate its damages never seems to enter the discussion.

Good luck to our boy Kuz:

I'm sad to see him go. I will reiterate a bit of what I posted in the comments at the Stuttgart offside, as I think he was a casualty of Prandelli's switch from the 4-3-3 of the previous couple of season to the 4-2-3-1 late last season and into this season.

Kuz was great on the right hand side of the 3 man central midfield, as he isn't really a true holding midfielder and doesn't have the pace and crossing ability to be a winger. I think he'll do well in the Bundesliga as the all-action style suits his game well. Considering his age and experience, I think he was a good purchase for the German side. I'm sure he'll be balooning sitters over the bar all throughout Germany in no time. Thanks for the memories Kuz.

It looks like the young Argentine will be on his way from Boca Juniors in 3 months time. As we've discussed before he's a great prospect and I don't have a problem with it from that perspective, but I'm not sure that he's going to be able to shore things up this season. Plus, he's got to get over an injury.

The interesting tidbit in that article, which may or may not have any merit, is that Dainelli will be off-loaded to Sampdoria once Munoz comes in. I'm on record as saying that Dainelli is not a CL-quality CB any more (probably never was) - but I'm not sure I'd be willing to part with him until we really see what we've got with Munoz.

Swap Deal with the Hammers:

Da Costa is gone again - and fair enough, as it seems that it was never going to happen for him at Fiorentina. I was always excited for the possibility that he'd be a big help but he never panned out - he rarely played for Fiorentina, didn't crack Samp's lineup on loan and clearly wasn't in Prandelli's plans.

And the new guy is young Ugandan-German Savio. His youtubes focus on the Brescia days since he didn't produce much for West Ham, but he's clearly a talented player. He probably won't get much action considering who is in front of him - Vargas, Marchionni, Santana, Jovetic, Mutu, Gila Monster and probably Papa Waigo unless he gets loaned out. Still, he's a promising prospect for a guy who wasn't going to be used, so I can't fault Corvino for this move.

That's all for now - I'll be back if there are any last minute transfer moves. Also, I'm planning a post later in the week, in which I'll pretend I'm Prandelli and will try to work out if there is a way to get both Jo-Jo and Mutu on the pitch at the same time.