Share All sharing options for: Pink Guys Come to Firenze 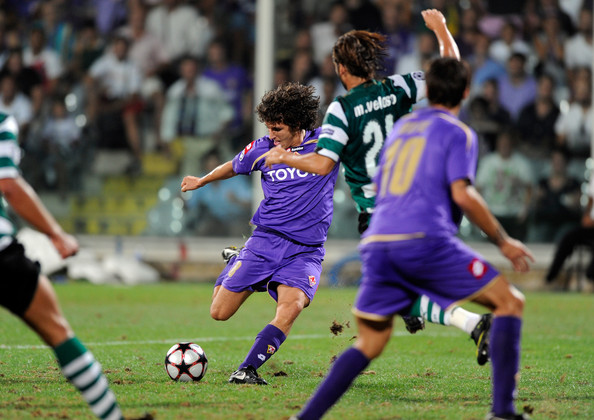 Happy Friday afternoon to everyone. I'm coming to you live from my brother's house up in Hamilton, Ontario where I'm spending the weekend. Had a nice early flight this morning to Buffalo, stopped at a freezing cold and wet Niagra Falls on the way and now I'm being stared at by his 3 cats and big huge dog since I'm an unusual person here in the house. Oh yeah, time for the Palermo preview.

Palermo come to town for the first home game of the new Serie A campaign, and the Viola could use a win after 3 straight draws against Sporting and Bologna. I think the Sunday night match will draw a big crowd and the home fans were impressive against Sporting on Wednesday so I'd expect that to continue. One disappointing thing that will probably not be corrected before the match will be the terrible shape the pitch is in. I think I remember the pitch looking similarly burnt out at the beginning of last season, and it is probably due to the fact that it has been at least 95 degrees every day for the last month and a half in Florence, but it is still rough seeing the normally fantastic surface in that kind of condition.

Palermo, in addition to being a team that has played well against Fiorentina in the last couple of years, have some big ambitions this year. I believe I saw the word scudetto in a review of their narrow (and pretty lucky, frankly) victory over Napoli last weekend. Throw this in the mix with their batshit insane owner and their intense new coach, Zenga, and things will surely be interesting.

Fiorentina will be relieved that the CL qualification is out of the way, but could be a bit low in the energy department. I expect Prandelli to make some changes to keep things fresh. This is the kind of game that needs to be won to really challenge for CL qualification, so here's hoping the Viola are ready to go on Sunday.

For the visitors, it looks like ex-Viola playmaker Liverani is not going to be able to go. It was nice to see him get a decent reception from the Franchi faithful last season but I'm not upset that his long left-footed passes won't be available to Palermo. Obviously Kjaer is a beast at CB and will be tough for the Gila Monster, Miccoli is always dangerous and would love to score against one of his many old teams, and Palermo has upgraded between the pipes with Rubinho.

For the Viola, there are a few unanswered questions. First, will De Silvestri be available? Comotto has played 3 full games in a row and could probably use a rest. Second, have we seen the last of Kuz? What about Santana? Is Mutu ready to start the game - he looked good in patches on Wednesday but he's still not fit enough for a full 90. How's Zanetti's ankle? Several other guys played 3 sets of 90 minutes in the 8 days as well - Gamberini, Dainelli, Monto, Gila Monster ... Here's what I'd like to see:

TeeVee: The match will be broadcast live starting at 2:30 pm EST on FSC. I've got no idea if I'm going to be able to catch it live due to traveling and the fact that my brother is not quite the sports freak that I am so I'm not sure he's got the channel up here.

Jo-Jo continues his hot streak and Santana celebrates his return with one as well. Yes, I realize that I've picked 2 guys who don't seem to be able to finish, but at least they are better than Kuz who couldn't hit water if he fell out of a boat when it comes to his shooting accuracy. I'm thinking that Cavani will get one for the visitors. First win of the season for the Viola, 2-1.