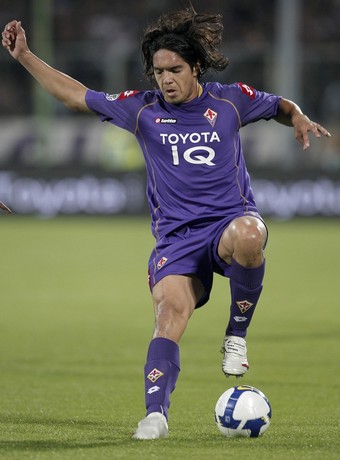 Good morning everyone. We've got a few things to cover, but we'll start off with a shout out to Mike R for reminding us that today, August 26, is ACF Fiorentina's 83rd birthday!. So Sporting is obviously in trouble.

The signing of Lazio RB, Lorenzo De Silvestri, has been completed. For me, this is a good move. He comes in at a reasonable price, and he's a young, promising Italian player. I see him splitting time with Comotto this season at RB, and hopefully one year from now he'll work his way into Prandelli's first 11. I think this gives the team a potential attacking option down the right, similar to what Pasqual and Vargas are able to provide from the LB position.

I was alluding to this article in the comments section yesterday, and the troubling this about it is Corvino's statement that the team only has 8 million pounds left to spend. That simply does not add up when you total up the proceeds from the sales of Pazzini, Osvaldo and Melo. The moves Fiorentina made this offseason have been on the cheap, but not necessarily poor moves. Clearly, there are reinforcements that could be made, especially to the defensive central area of the field. If it were me, I'd like a defensive midfielder who is a better player than Zanetti and Donadel along with a bad ass CB.

But, I think Corvino's being coy ... the 8 million pound budget is what he used to acquire Melo, who wound up being one of the key factors to the team's success last season and then was sold for nearly 3 times as much money 1 year after the team acquired him. Obviously, it would be tough to replicate that every year, but Fiorentina need to stick to acquiring players from 3 categories: young guys no one has heard of yet (Jo-Jo), undiscovered gems who have experience in 2nd divisions or unfashionable leagues (Melo) and reclamation projects who have motivation and something to prove (Gila Monster). Maybe Munoz from Boca Juniors is in the first category, but we all know that Prandelli is not particularly willing to play young CBs who are not able to speak Italian well (cough, Da Costa, cough) so if he comes in he's probably one for the future. So hopefully our man Corvino has something up his sleeve because it could be a long season with a gaping hole in the back.

After the away leg, while there were problems with how the team played - specifically coming out very lethargic for the first part of the second half - but you'd always take a 2-2 result. I'll say that Sporting was a tougher opponent that perhaps I gave them credit for, and today's match will undoubtedly be a difficult one. We're through with a 0-0 or a 1-1, but I think we all know that defending is not our strong suit. Prandelli knows as much and wants the team to come out agressively.

I think that the whole key to the game will be whether Fiorentina can boss the possession in the middle of the field. This was a problem against Bologna over the weekend, and while they did a good job in the first half in Lisbon last week, in the second half Sporting really took hold of the game. A lot of this will fall to Monto since it is not clear if Zanetti's ankle will be healthy enough to go tonight. Many commenters have been making this point already, so it is hardly new, but it's time for Monto to step up and prove that he's capable of running the show. He's good enough, he's old enough and he's got enough games under his belt to take the responsibility on. Get some, Monto.

There's a bit of good news on the Sporting injury/suspension front. Postiga is out injured and that ass clown Vukcevic took his shirt off so he can't play (bet Jo-Jo is going to heckle him incessantly about this the next time they show up for Montenegro duty). So that's them without 2 of their top forwards, and that guy Caicedo who played for Man City before the decided to start buying any and all strikers with bad attitudes that teams were willing to part with for inflated sums of money isn't ready to go either. So, it looks like they'll have to rely on the midfield trio of Fernandez, Veloso and Moutinho to try and get some goals.

Fiorentina: Here's what I think we'll see - Prandelli will go with what he thinks his best 11 is for this match.

For me, I think the inclusion of one of Santana or Kuz would be nice to see - they have been called in for the match so they could play. I think these two could help with possession but it is not clear where they sit in regards to being healthy (Santana) or in Prandelli's doghouse/transfer list (Kuz). I also think that Old Man Jorgensen and Jo-Jo have a good chance of coming off the bench to try and hold the ball in the second half.

The game will be live on Fox Sports Espanol at 2:30 and on tape delay at 5:00 on FSC. We'll do our usual internets thing in the comments. I've got my fingers crossed that I can see some of the match live but I might try and stay away and catch it on my DVR since I've got to stay up late because my men's leage game doesn't start until 10:45 tonight anyway.

I'm feeling a nailbiter. I think Sporting will score first, but the Viola will hit 2 on the counter - Mutu and Gila Monster.