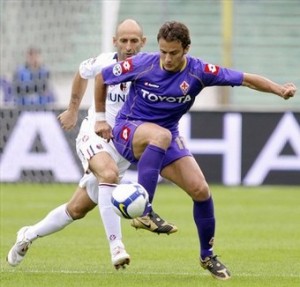 Today in the city of Bologna the mighty Viola drew 1-1 with their feisty opponents, on the heels of drawing 2-2 with their Portuguese foes midweek in a Champions league clash. One could certainly argue that the boys got good results from both games, considering they were on the road, and especially in the CL qualifying match vs. a worthy opponent where the away-goal rule will only help them.

I cannot shake the uneasy feeling I’ve had since the end of today’s match, however, the feeling the something key is missing from the team.

Neither Sporting nor Bologna possesses a particularly impressive offense, but we gave up two in Portugal and another one today that was particularly soft. And in both cases the total would have been higher without the typically yeoman work of Bassy and Gamberini. To state the obvious, we need another centerback. I know everyone already knows this. And frankly, I think we need more steel for the holding position in midfield. And by “steel,” I mean we need a 6-foot tall, 185 lb. Brazilian lunatic with a temper problem who scares opponents (as well as his own teammates) to death. Oh wait. We had that. Then we sold him to our arch-rival. Shit.

It’s been a tough start to the year. Our first game of the season was nearly a “must-win” (or perhaps a must-draw, at worst) when one understands the importance of the CL play-in matches. Then we had a road game where we really, really needed to get three points. We didn’t. Now we have to play the second leg vs. Sporting and hope for the best.

I don’t mean to be too pessimistic, but I do hope we get some defensive help soon. I can’t take another season of hoping the boys score three because I know we are guaranteed to give up two. We’ll see how it goes.

Other thoughts from the week:

• A number of you commented on the propensity today to kick the ball long and wait for Gila to pull something off. It can be effective, but it’s not always pretty to watch. Hopefully we’ll see less of this as Marchionni gets settled. Not much going on on the right today.

• I know My Precious played only the first 45 today, but I thought he looked great while he was out there. His flicks and crosses were the only spark of creativity on the offensive side in the first half. I’m not sure if he pairs well with Gila, however, who is a poacher but also a very strait-ahead player. I would have loved to have seen what would have happened if a fit Mutu had been on the end of some of those flicks.

• Monto: Again, too quiet. (I feel like I am just cutting and pasting this from last season.) When are we going to see him become the kind of guy who just owns a football match from whistle to whistle? He’s 24 now. Its time, Ricky. Its time.

• Gamberini was great today. The only time he gets in trouble is when he has to work twice as hard so as to cover for the other CB. But when he stays home, he’s as good as there is.

• Comotto was such a pleasant surprise last year, but he seemed old and almost two beats slow all day today. Full backs can age (and be exposed) pretty fast, with all the running they do. Is this going to be yet another problem area?

• Bassy: It’s good to have you back in my life. Things felt so EMPTY all summer.

• Finally, I am glad to see Osvaldo showed a little class. Good for him. Maybe he’s getting it.

Anyway, I am not quite as disheartened as the post might suggest. I am basically OK with the two draws. I am just afraid of ominous things on the horizon. A win at home vs. Sporting this week, however, will solve all my problems. I am hoping, as you can imagine, for the best.

Forza Viola, everyone, and have a good weekend. It’s good to have Serie A back in out lives.