Viola Kick off Serie A Campaign at Bologna

Share All sharing options for: Viola Kick off Serie A Campaign at Bologna 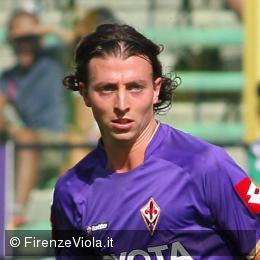 By now, we've got less than 24 hours until the return of the Viola! The 2009-2010 campaign kicks off with a match against Bologna and Viola old-boy Osvaldo. I'm planning a longer post regarding a full season preview, but I'm not going to be able to get that up until after the Bologna match.

Ok, a few things are still happening because the transfer window is still open. It is tough to tell right now, as none of these Viola stories are official but it shows that Corvino's work is not yet completed. Negotiations are ongoing for the Argentinian kid center back, Munoz, and possibly for Milan RB Massimo Oddo. I see no problem with going for Munoz, as CB is a position that needs to be upgraded, but I'm not sure that an 18 year old with less than 25 appearances at Boca Juniors to his credit is someone who will be able to make any kind of instant impact. Plus, I believe he's recovering from some kind of an injury - I was bummed because I saw the Boca Juniors - Velez Sarsfield Copa Sudamericana game on the teevee last night and thought I could get a bit of scouting in. No such luck. As for Oddo, he can cross the ball all right, but I fail to see how he'd be any kind of an upgrade over Comotto. I'd much rather see the team go after a young RB who could split time with Comotto this season while getting his feet wet with an eye towards taking over the position in the near future, but what do I know, really?

Oh and Zalayeta is going to Bologna on loan, but I'm guessing he's not playing tomorrow. Not a bad option for them this season, as they were too dependent on Di Viao last season and Osvaldo has yet to prove he can be counted on for anything in the consistency department. He can be counted on for a questionable attitude, nice hair, a thin headband, and occasional epic Batistuta imitation celebrations, however, so he's got that going for him at least.

It will be important to get a result in this match, as this is the type of away match that Fiorentina need 3 points from in order to maintain a top 4 place. Bologna were not particularly impressive last season and haven't done a whole hell of a lot to strengthen their squad. The new keeper, Viviano has long been tipped as one of the next great goaltenders, so that might be a problem. Also, Osvaldo will be motivated and Di Viao does a good job of taking chances if they are presented to him so the back line will have to show better concentration then they did for the first 15 minutes of the second half in Lisbon.

For Fiorentina, the match on Thursday showed both the good and bad sides of the squad. Many chances were created and it was an entertaining and open game to watch. However, there were defensive lapses, the squad got tentative after going up a man and many of the excellent chances were not finished off. I think Prandelli will make a couple of changes because of the mid-week game this week and the big second leg coming up against Sporting. Specifically I think Mutu will come off the bench due to the fact that he's still trying to regain his fitness and he will be needed to secure qualification to the CL group stage.

Fiorentina: Looks like Zanetti won't be making the trip due to a minor injury so there's a position open in the holding midfield. Also, as weak as Dainelli looked at CB, I'm not entirely sure that Natali will supplant him. And, I'd tip Pasqual to get the start at LB with Gobbi to come on as a sub for either Pasqual or Vargas, depending on who does more running in the first 65 min. Here's my guess:

The match will be broadcast live in the USA on FSC at 12:00 noon EST.

I see the Viola getting the campaign off to a flying start, 2-0 with goals from the Gila Monster and Montolivo.

Forza Viola and I'll be back with a longer preview of the entire season either Sunday or Monday.