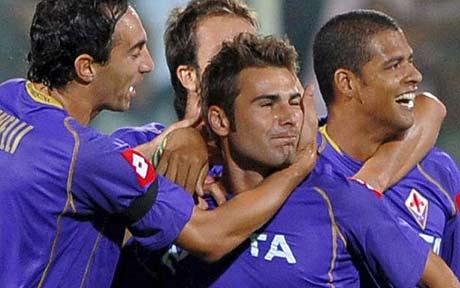 Here we go with the 3rd of 4 parts - time to discuss the strikers.

Gila Monster: When you buy a big name center forward, the expectations are pretty clear, you're looking for a strike ratio of better than one goal for every two games played. Gilardino scored 24 in 43 appearances for Fiorentina this season, 19 of those in Serie A. He came through and lived up to the billing. Gilardino slowed a bit towards the end of the season, production-wise, but he always worked hard for the team and showed the ability to play as a lone forward in the 4-2-3-1, or as the spearhead in the 4-3-3 in addition to teaming effectively with Mutu up top in the short-lived 4-3-1-2 setup. Well done overall, and for me he was the 3rd best player on the team the season. Grade: A

Mutu: When he played this year, he was his usual devastating self. 14 goals in 27 appearances, and his hat-trick away to Genoa after Fiorentina fell behind 3-0 is one of the major reasons the team was able to hang onto 4th place in the end. Injuries remain a concern, as he missed stretches with elbow and knee injuries. His recent surgery on the elbow injury will hopefully stabilize things and remove that as a problem, but the fact that our man is already 30 and has not played a full season for a couple years running is a clear problem. His recent comments about his desire to remain with Fiorentina have led viola fans to believe that there will be no drawn-out transfer saga this offseason, which is a good thing. Grade: A-

Jo-Jo: The young man had a rocky begininng, and clearly had trouble adjusting to the level of play in Serie A. He came on as the season progressed and he got consistent playing time. However, even when given a starting role in the last couple of months, he showed a youthful inconsistency, often following an excellent performance with a lackluster one. For now, it looks as though his best position is in the middle of the bank of 3 in the 4-2-3-1 and in time he could possibly play as the trequartista in a 4-3-1-2 setup. He was an excellent signing by Corvino and remains a player to watch for the future. Grade: B-

Bonazzoli: The big man came on loan from Samp as a part of the Pazzini deal. He offered a big target, was good in the air despite being lumbering and not particularly skillful. He added something as a 2nd half substitute, but the viola pretty much got what they bargained for here. Good luck to him next season back at Samp or wherever he winds up. Grade: C

Pazzini: We've discussed him at length on the blog this season, but my position is that it simply was not going to happen for him at Fiorentina. He played very well after moving to Samp, especially considering the terrible start to the campaign for Fiorentina where he missed more chances than any of us care to remember. Corvino got a decent price for him, about 9 million euros, I think. He scored 1 goal this season at Fiorentina, and for his time in purple he merits a poor grade. Grade: D

Osvaldo: While all viola fans will fondly remember his goals from spring 2008 against Juventus and Torino, better players in front of him combined with his shit attitude meant that it was time to go. I think Corvino got 7 million euros for him. This season, he made 20 appearances in Serie A and scored exactly 0 goals. For a forward, this is as bad as it gets. But, hey, at least Bologna didn't get relegated, along with it being one of the best places in Italy to eat. So he's got that going for him, which is nice. Grade: F

Overall Outlook: It looks like Mutu and Gila will be back and 100% come time for preseason training. This is excellent news, and these two are proven forwards who we can mark down for 20 plus goals apiece in all competitions next year if they remain healthy. Beyond that, though, Fiorentina have some holes to fill.

I think a lot of this depends on the tactical set-up, which I'm planning on doing when I take a look at Corvino and Prandelli in the next part. However, the options at forward beyond the main 2 guys are very thin, especially for a team with Fiorentina's ambitions.

Let's start with the guys who are contracted to Fiorentina and see if we can come up with anything. Arturo Lupoli has expressed a desire to remain with Sheffield United in the English Championship and has never really seemed to be in Prandelli's plans after he was signed by Corvino after a successful tenure in the Arsenal youth set-up. He's got no results on anywhere near the level we need to count on him, so if he wants to stay in England, that seems ok with me. Jefferson, the big Brazilian kid remains as mystery, as do Lepiller and Hable. Papa Waigo is probably not the answer as a pure striker either, as I think he's probably most effective as a winger.

As we saw with the pursuit of Crespo, I think Corvino has a desire to bring in an over-the-hill center forward who has a successful goal-scoring record. This guy would serve as the vice-Gila Monster, coming on as a sub in CL matches and maybe playing 1/2 or 2/3 of the Serie A match following a CL match or an international where Gila got the call. I'm on board with this, provided it is the right guy and there is no confusion as to the role. I think going with a more experienced player in this role would serve the team better than trying to break another young guy into this level of competition (See Jo-Jo's struggles in the early season).

The other major question is this: Is Jo-Jo the vice-Mutu (as suggested by Dumitru) or should Corvino be looking for someone who is more of a pure goal-scorer to fill this role? I see Jo-Jo as more of a passer than a finisher, at least at this point, and I think a young guy would be the best option if Fiorentina are committed to playing with 2 forwards for most of the games next season.

So, that's all for this part. Let's keep the discussions focused on who I screwed grade-wise and what we think the team should do regarding our obvious lack of depth up top once you look past Mutu and the Gila Monster. Have at it.