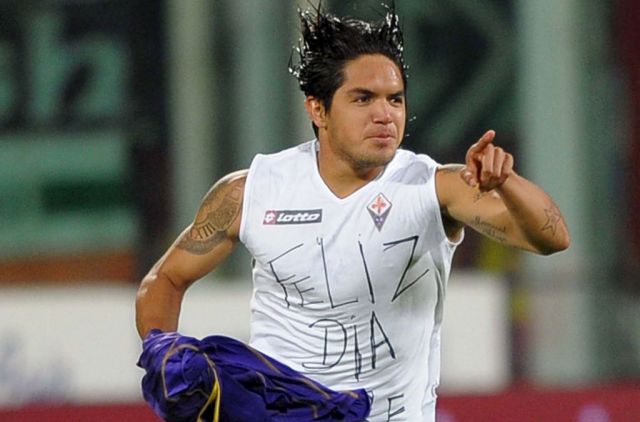 Here we go with part 2, turning our attentions to the viola midfielders. Thanks for all of the comments on the first part, and I'll start with the individual reviews and then turn to an overall analysis.

Santana: A beguiling player who probably causes more disagreement among viola supporters than anyone else. At first he was not good enough in Prandelli's 4-3-3 out on the right wing, and then he was the sole source of creativity in the 4-3-1-2 setup. Then he got hurt. The man possesses decent speed, sick dribbling skills, creativity and good character. He also cannot finish to save his life and is not the best crosser of the ball which limits his effectiveness as a winger. He should be 100% and ready to go by the time preseason training begins. Grade: B-

Montolivo: I think the reason Monto is so frustrating is that there is a gulf between what we know, as fans, that he is capable of and what we saw him produce this year. Too often he is invisible for long stretches of matches. He's durable, he possesses a great eye for a pass and a cannon of a right-footed shot, but he also gives the ball away far too often. Also, what is his best position on the pitch? Is he a left-sided central midfielder, a trequartista or a deep-lying-Pirlo-style playmaker? I'll give him a grade based on what he produced, but considering his potential, this could really be a lot higher if he lived up to the billing. Grade: C

Melo: Obviously, I'm in the tank for My Main Man, Felipe Melo. He was great this year, especially in winning the ball, keeping the ball both by passing and with the ball at his feet and I think he could play further forward than he did this year for Fiorentina. Many teams, most prominently Inter Milan, are going to be keeping Corvino's phone ringing with inquiries as to his availability this offseason. He's also worked his way into Dunga's first choice 11 for the Brazilian national team. Clearly, the man is a beast in the middle of the park, no doubt about it. However, he needs to work on his temper and his cards. There was a period in the second half of the season where he had things in check, then he beat that Cagliari dude's ass and then lost his shit away to Lecce. For me, he was the best Fiorentina player not named Sebastien Frey this season. Grade is discounted for his anger management/control issues. Grade: A-

Kuzmanovic: I think that Kuz had a similar season to Monto, in that he did not live up to his potential, and actually took a step back from last year in terms of his on-pitch production. Still, he's only 21 and drawing interest from Spanish clubs such as Sevilla and Atletico Madrid. For me, he's an excellent 2-way midfielder who should still get a lot better. His major weaknesses this year were a plethora of passes sent directly to the opposition and the massively annoying fact that when he shoots, he cannot hit water if he fell out of a boat. Some finishing practice this offseason and some rest should help him live up to expectations next year. Grade: C

Vargas: After moving to the left wing, Vargas showed why the expectations were so high for him. I was impressed with his willingness to play wherever Prandelli asked him, and freeing him of some of his defensive responsibilities allowed him to combine well down the left flank with Monto and Pasqual, improved his crosses and even led to his scoring a few goals. I think this proves that left wing should be his primary position, and I look forward to seeing him there next season. Grade: B+ as a LW, I'll say B for the season in total

Donadel: I've long admired Marco for his dedication to the cause and industrious style of play. He lost his spot as holding midfielder this year to Melo, who is a better player than he is, no doubt. He seems to play better when he's given an extended run of games and also if he gets the start as it takes him awhile to settle into the game when coming off of the bench. He's also fairly card-prone, partially due to his role of harassing the opposing playmaker and partially due to the fact that he's a tough bastard. He might not be the guy for a clash against a top league team or for a CL match, but he's excellent for midfield depth and will hopefully remain part of the squad going forward. Also, I'd like to see some more of his right footed lasers, like the one he scored last season against Samp, I believe. Grade: C

Gobbi: Another solid contributor, his versatility has shown through as he has done a job at left back, central midfield and also out on the left wing. Also, the air guitar celebration with the corner flag after his goal against Roma was spectacular. A great squad player who performed well when called upon. Grade: B

Almiron: I was looking forward to writing this one, racking my brain for what to say. The single worst player to put on a purple shirt this season, hands down. He was a waste of a loaned player, but we should know better than to take cast-offs from Newcastle. Sergio, if you need help packing your shit, I'm on the next plane. Good luck at Siena, or whichever relegation-candidate you wind up at next year. Grade: F

Semioli: Franco came on well towards the end of the season and did a good job on the right flank at times. He works hard and crosses the ball fairly well, but I'm not sure he's a first-choice player. No goals for a guy who plays RW and started 14 games and coming on as a substitute in 8 more is not going to hack it. Grade: C-

Jorgensen: The Old Man scored the late equalizer against Lecce that guaranteed us the 4th spot, so we appreciate that. His injuries severely limited his appearances this season, but he did enough to earn a 1 year contract extension. He's a cagey veteran, has a good head on his shoulders, good leadership skills and can hopefully teach a few things to some of the younger players. Plus, he can play every position on the pitch except GK, CB and CF. An excellent squad player to have. Grade: C+

Many viola midfielders underachieved this season, led by Kuz and Monto. In addition, Prandelli changed his system more than in years past, going from a 4-3-3 to a 4-3-1-2 to a 4-2-3-1. I would really love to know what he wants to do with the formation, as that would help me try and figure out where guys could slot in for next year and who potential targets could be in the transfer market.

One major problem this year was a serious lack of goals from the midfielders. Vargas had 3, Monto had 4, Melo and Kuz had 2 and no one else scored more than 1. I think that several players in this group are capable of double digit goals, when you factor in all competitions. I'm specifically referring to Melo, Kuz and Monto. We went over Kuz's shooting problems, and Melo didn't have much license to go forward, and who the hell knows what was wrong with Monto at times this season. What is clear is that someone, or better yet more than 1 guy, needs to step up and take some of the scoring load off of the Gila Monster and Mutu.

And, in reply to Alex W's comment yesterday that when you look at the numbers, the Viola's Serie A defense wasn't too bad. And, yeah, on the face of it, conceding 38 goals in 38 games is not terrible. However, I think that the fact that Fiorentina had a weak defense prevented Melo, Kuz and Monto from getting forward as much as they would like, because they had to try and plug the holes at the back. A more solid defense will allow these guys to chip in with more goals, at least in my opinion.

As far as what is necessary in the transfer market, a good bit of that depends on what happens with Melo. Apparently the guy we bought last year for 8 million pounds is worth an offer of 18 million pounds plus Burdisso from Inter Milan. That's a nice profit if the player wants to go, but I'd still rather keep him for one more season and sell him after the world cup for even more cash. I think there is enough talent across this group to get the job done, though without knowing what Prandelli plans to do with the formation, it is hard to determine what we need. I think another guy with some creativity to challenge Jo-Jo and Santana could be an option.

So, I'll throw it out to you guys. First, like yesterday, feel free to dispute my subjective grades for these guys. Second, what improvements would you like to see in the Fiorentina midfield? Feel free to combine that with a discussion of the tactics, but I think I'm going to save my thoughts on that matter for the 4th installment when I talk about the management. Forza Viola!