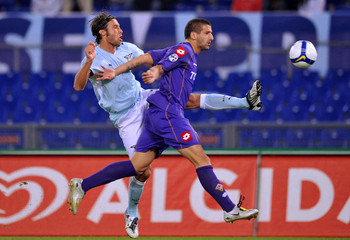 Because the silly season is already in full swing, and there doesn't seem to be much in the way of actual news on the horizon, I thought it would be good to do an in-depth multi-part analysis of the performance of the squad this season. I'm planning on doing 4 parts, at least. We'll start today with the defenders and goalkeepers, move to the midfielders, then the forwards, then the coach and management, and after that, we'll talk about the necessary upgrades to the team. Of course, some of the speculation about the upgrades will be sprinkled throughout. I'm going to do a few sentences on each guy and then give out a letter grade, as a way of flashing back to my days as a middle school teacher, which I did for a couple years before the whole lawyer thing got rolling.

Bassy: World class skills pared with frosted hair and terrible sideburns. What else is there to say? For my money, since Bassy arrived in the fall of 2005 on loan from Parma, he's probably the single most important player in terms of the Viola's rise to the top echelon of teams in the Serie A. This season, he played every game except for 1 and his saves were a massive reason for Fiorentina's qualification for the CL again. Many teams will want him this offseason, Bayern and AC Milan in particular, but he has repeatedly proclaimed his loyalty to Fiorentina. Though Julio Cesar at Milan was very good this year, Bassy should merit equal consideration for goalkeeper of the season, especially when you consider the defenses those keepers have in front of them. Grade: A+

Storari Played 1 game. Whatever. He's on loan from Milan and I'm not sure whether he's set to go back or not. He's straight outta Pisa so maybe he wants to stay. Grade: C

Gamberini: Solid. Maybe not quite as good as in recent seasons but he was asked to shoulder a large part of the defensive responsibilities due to the fact that he was paired with below-par central defenders like Zauri, Dainelli and Kropdrup. Also, he needs to lose the faux-hawk. Not a good look for him. Either man up and go with the full Mr. T mohawk or even that shit out son. Grade: B+

Dainelli: He has been a great servant to the club and served as captain since the start of the 2005-6 season, and he's been with the team since the re-entry into the Serie A in August 2004. Now that we have that out of the way, he's a squad player, at best, for a CL team. He is no longer good enough to be first-choice for a team with Fiorentina's current ambition. If he's ok with being 3rd or 4th string, then I'm ok with keeping him. If he wants to be a first choice player, maybe one of the newly-promoted Tuscan teams will want him and we can move him on and give him that chance. Grade: D

Kroldrup: Similar season to Dainelli. He's a squad player and extended his contract through next season. He's not afraid to kick someone, which I like in a defender. Grade: C -

Pasqual: Goofy season, in which he went from the outhouse to the penthouse or whatever the cliché is. He was out of favor at the start of the season and eventually found form and gave the Viola a great left side when he combined with Vargas in the last couple months. Other teams may be interested in him because he's got 1 year left on his contract and he's had his issues with the management in the past. I hope he stays because he's solid defensively and has a great left foot for crosses. Grade: B

Comotto: Solid defensive RB. Good leader, it was obvious why he was Torino's captain last year. He doesn't offer much going forward, and cannot cross like Pasqual. He'll be 31 in the fall. I think a young RB, maybe one of the Brazilian kids Corvino is looking at, to push him would be nice. All in all, he did a good job. Grade: B-

Zauri: He was Ok as cover at RB, and piss poor as a CB. He was here on loan from Lazio, I don't think he'll be picked up (I believe we have an option to buy him for somewhere around 3 million euros). Sweet goal vs. Catania though. Grade: D

Vargas: Considering him only as a LB, he was caught up field too often, didn't cross well and looked unsettled. Showed he was a good team player by moving up the pitch and picking up his play. I think he could see spot duty at LB in the future, but his play this year proved he's better at left midfield or left wing. Defender Grade: D+

Da Costa: Was considered a big prospect at one point. He got buried on the bench and was in Prandelli's doghouse. Got loaned to Samp, didn't play there either. This pisses me off because Fiorentina obviously need a CB and we have no idea if this guy is an option or not. Grade: Incomplete

Clearly, the defense was the weakest point of the team this year. This showed on many occasions, both in the CL and in Serie A. Fiorentina couldn't make the 2-0 lead away to Lyon stand up in the CL group stages and showed a consistent weakness against teams with quick forwards. The examples that come to mind immediately were the goals leaked against Lecce (both games) on faulty offside traps, the fact that Udinese's speed gave the defense fits at the Friuli, Karim Benzema and Pato could do whatever they wanted, and Bayern constantly threatened over both legs.

Even so, I'd say that this is a correctable problem. Gamberini needs a CL-quality partner in central defense. Corvino is on that job, with the things that came out about how close he was to signing Ivanovic away from Chelsea in the winter window. That may not be possible any more, but he's clearly working on it. A young RB would be nice to pair with Comotto. The young guy could learn a few things, play part-time this season and be ready to take over first team duties a year from now. Hopefully this RB would have the speed and crossing ability to make Fiorentina dangerous from the right flank as well as the left flank.

Also, keep Bassy and keep him happy. That is all.

Let's try to keep the comments focused on the defense for now. I'll put up a new post if some transfer news actually happens. Feel free to tell me I'm an idiot, look into guys further than I did or suggest potential targets for our man Corvino. Have at it.