Share All sharing options for: If you see this guy ... 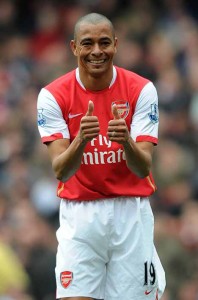 Please tell him to shut up!

Apparently Gilberto has been talking up the virtues of Arsenal Football Club to My Main Man, Felipe Melo. I watched a good amount of the Confederations Cup (and am very conflicted about the USA's performance) and Melo showed his quality. He did not have the best game against South Africa, but any team in need of a combative central midfielder who can recover the ball, effectively link midfield and attack, win many balls in the air and score the odd goal would be foolish not to look into acquiring Melo. And, as anyone who follows the Gunners will tell you, Arsenal badly need someone to play behind Cesc Fabregas in central midfield.

Obviously, I've made it clear on the blog that I'm in the tank for Melo, as I think he was the best player on the team not named Bassy last year. He has his problems, mainly being his propensity to pick up cards and the fact that he lets his temper get the best of him at times. I still hope that Fiorentina can keep him for the upcoming season with a view toward selling him for lots of cash next summer after he starts for Brazil and they go very far at the World Cup in South Africa.

WTF is up with the Defensive situation Corvino?

Ok, so lots of distressing news on this front has been popping up recently. Clearly, the one thing Fiorentina need more than anything else is a central defender to partner Gamberini.

We have seen no news about potential targets in this area, and can only hope that this means that something positive is going on behind the scenes. There is this distressing rumor that Milan and Wolfsburg are after Gamberini. This cannot happen.

Juan Manuel Vargas had an inconsistent first season at Fiorentina, and with Drenthe possibly on the way in, he could be sold to Fenerbache to replace Roberto Carlos and replenish Fiorentina's transfer funds. I'm conflicted about this because I am not familiar with Drenthe. I thought the combination of Vargas and Pasqual was very nice on the left side, but I was not convinced that Vargas could play left back. Keeping Pasqual to start at left back and adding a more natural winger could be a good move, and if the Turks come in with a big offer, I suppose this would be all right with me.

Also, Corvino may be getting Cassetti from Roma on loan as defensive cover. Whatever, he could do the same job that Zauri did this past season. I still prefer Commotto as RB, and was hoping for a young guy to come in there and play the back up role, but Cassetti could serve as an effective bridge there.

There isn't much concrete here. A bit of scuttlebutt about the young Swede Berg who has been tearing up the U-21 European Championships this summer was tamped down by Corvio.

But, Julio Cruz has looked around and it appears he might agree to what Fiorentina have offered. I think he's still got something to give and he would be ideal to back-up Gila - I was hoping for a veteran who could contribute in a part-time role. I think Cruz can do this.

Hope everyone had a nice weekend and it is time for me to get cracking on some work. Let's cross our fingers that Corvino has something up his sleeve for CB. Forza Viola!