Are you in NYC? Go see Mutu play a charity match!

Share All sharing options for: Are you in NYC? Go see Mutu play a charity match! 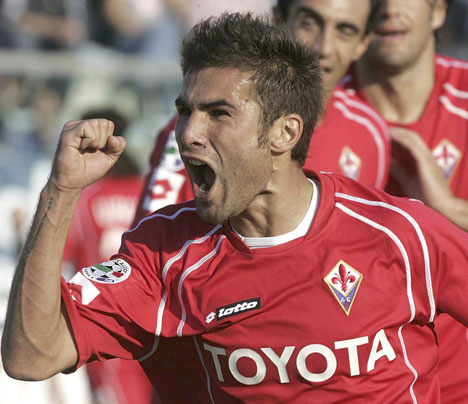 Shout out to Tomas for noting this in the comments of the previous post. I knew of the match but did not see until today that Fiorentina star Adrian Mutu would be joining the luminaries for the second annual Steve Nash-organized "Showdown in Chinatown". So if you're going to be in NYC tomorrow, check out the match which starts at 6pm. Based on the pictures and videos I saw from last year's event, I'd recommend that you arrive early if you want to see anything. Or bring a box to stand on unless you are as tall as Yao Ming (who has also been rumored to possibly make an appearance).

Here are the links if you'd like to read more about the match:

Obviously this seems like a fun event, it is for a good cause, and it is free to watch if you can make your way down there. I'm a big fan of Nash's for many reasons, among them his basketball skills, the fact that he spends his summers in NYC playing soccer to stay in shape, the fact that he seems like a genuinely good dude and obviously his charitable endeavors are pretty impressive. And in addition, he is on of the primary investors in the forthcoming Vancouver MLS team (that's his hometown). Plus, Mutu in NYC! Until we can get Fiorentina to take a summer tour of the USA (still holding out for that one), this is going to be as close as Viola fans can get to a Fiorentina player without heading across the pond.

It looks like Fiorentina have the support of the new mayor of Florence regarding development plans for a new stadium. This is great news as the Artemio Franchi has seen better days, and a modern stadium would go a long way to increasing the revenue stream for the club and truly bringing Fiorentina into the modern age of football - and hopefully ahead of some Serie A competitors, to boot. I hope this continues according to plan and doesn't wind up being a long, drawn-out saga like my beloved DC United have had to go through. I'll spare you the details, but fuck Adrian Fenty for that. Moving on.

It looks like Royston Drenthe is close to coming to Florence on loan from Real Madrid. I'm assuming this is partly because he didn't get a ton of playing time last year and partly because Real Madrid are kicking all of their Dutch players out the door because they are not famous enough and have not recently had sex with Paris Hilton. Or something.

I'm fairly conflicted about this, as I liked the left side of the field at the end of the season with Pasqual at left back, Vargas at left wing and Gobbi providing cover. One good thing about Drenthe is that he does offer plenty of pace, which is an area where Fiorentina were lacking last year, aside from Vargas. And, as we have beaten into the ground, what Corvino needs to be primarily doing is finding at least 1 CL-quality center back.

I'll close with a quick apology for slacking on my blogging duties. I'm planning on updating the blog at least a couple times a week and more if news warrants. I had a rough week at work last week and was out of town for a few days, so I was slacking. I've also got most of the Prandelli season-review post written, and I should put that up in the next couple of days before we've all forgotten how he performed this season. Good luck to Mutu tomorrow and please send pictures if you happen to make it to the game.