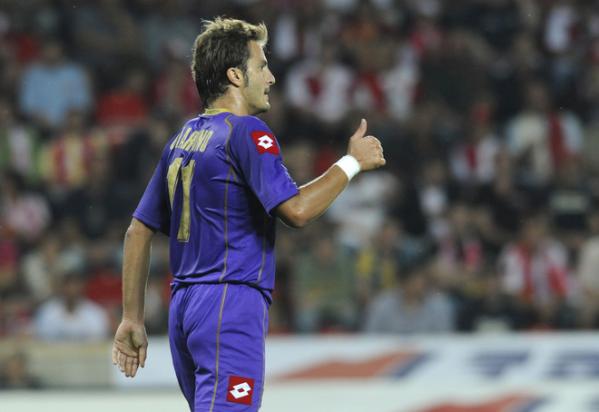 Fourth place Fiorentina will travel to Sicily tomorrow to take on Catania. These are two teams headed in opposite directions, as Fiorentina have 4 wins in their last 5 games, while Catania have lost 4 of their last 5. Also, the Sicilians have secured their safety in Serie A, as they sit 15th in the table with 40 points. So, it is not entirely clear what they have to play for heading down the stretch, other than avoiding the wrath of a certain bald ex-azzurri goalkeeper.

Catania are a decent home side, with 10 victories, 1 draw and 6 defeats this season. Plus, you'd have to suspect that they will be fired up to play well against Vargas, who made his name in European football with Catania.

This has been a relatively quiet week in Florence, with not too much going on. Corvino maybe signed a Brazilian right back, Mutu's court case got delayed and the squad beat up on a local prison team in a friendly. This is an interesting week in the battle for 4th place, as Genoa have the difficult away trip to Atalanta, where Napoli, Lazio, Udinese, Inter and Roma have already lost this year. Plus, Genoa are without 2 key players due to the card-filled derby last weekend. Thiago Motta and Matteo Ferrari will have to sit out due to suspension. A Viola win coupled with any type of Atalanta result will do nicely in the breathing room department. So, forza second-rate nerazzurri!

Bonazzoli and Semioli are injured and won't be venturing to Sicily. Melo's suspension is up, even if he doesn't resent kicking Diego Lopez's ass. Mutu is improving but he's not quite ready to come back. Almiron is injured as well, so that's some more good news. Vargas has been dealing with some swelling in his knee, so he will be ready to start but most likely will not be able to go the full 90 minutes.

For Catania, they will be without dangerous Japanese striker Morimoto due to suspension, and Ledesma and Potenza are also out for this game. Also, besides the fact that Zenga is their coach, they are from Sicily and their ultras used to keep a cache of weapons in their piece of crap stadium, I don't have a whole lot to tell you about them. Oh yeah, they've got a sweet elephant on their crest.

I'm not entirely sure how Cesare will put out his team this week, but I think the main decision he has will be what to do with Semioli's spot. I think this is a case again where he will figure out a way to get his best 11 out on the field to start the game. I think he'll stay with the 4-2-3-1 since it has been working so well.

For Catania, I'm ripping this straight from C4 due to my lack of knowledge. Looks like they'll line up in a 3-5-2. Kosicky; Silvestri, Silvestre, Stovini; Capuano, Sciacca, Carboni, Biagianti, Tedesco; Martinez, Spinesi

No such luck. I'll see you guys back here tomorrow morning at 9 am and we'll do our usual exchange of pirated internet streams.

Catania are pretty much safe, with 40 points in 15th place. They are at home, and might be fired up to try and stick one to their old teammate, Vargas. But, I think the Viola are too strong and too focused to let this one slip away. I'll go for a 2-0 victory. Melo will celebrate his return with a header off of a set piece or corner kick, and the Gila Monster will strike again. Forza Viola!