Fiorentina 1 – Torino 0: The Briefest of Recaps

Share All sharing options for: Fiorentina 1 – Torino 0: The Briefest of Recaps 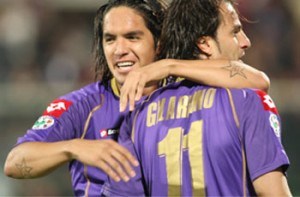 Yesterday in beautiful Florence, mighty Fiorentina defeated the team from Turin not named Newcastle United 1-0, keeping their coveted fourth-place spot, and staying just a point in front of the hardy challengers from Genoa.

I don’t have a lick of time tonight, as usual. I just put my little boy to bed and now I have three or four hours of editing medical manuscripts in front of me. For that reason, allow me to run some “quick hits” from yesterday’s game in lieu of a real recap.

• Certainly not the most inspiring 90 minutes of football I have ever seen played by either side. Neither team had a ton of fight in them, (Torino was particularly lackluster), key players were missing, there were further injuries during the game, and one of our guys missed an open net from three yards out. The Viola in particular had plenty of excuses (key players out injured and suspended) and so, in fact, did Torino (they’re just plain terrible) but all that really matters is we got the three points. I, for one, am not complaining.

• The Viola’s strategy was a bit weird after last week’s thrilling contest vs. Roma, but I think I got it. With all of our midfield muscle (Melo and Donadel) out, we had to keep pushing things up the wings to compensate. To bad a lot of the crossing was really ugly. Anyway, this partially explains the first half-quietness of My Precious and also, to a degree, Gila. I don’t really have a problem with the strategy, especially when it works. Yesterday was bound to be trouble no matter what with so many guys out.

• I liked Vargas yesterday, as did pretty much everybody: not necessarily because he scored, but because he is winning back that confidence that so marked him out last season. He also has a ton of versatility, which can be useful.

• Kudos to the defense as well: Torino didn’t try much, but the back four still played well, and deserves credit just as they deserve stick when they play badly.

• To Newcastle and Roma: let me give you a hearty, Nelson Muntz-inspired “Ha Ha” for your efforts yesterday. Nice shitty draws, people.

• This thing with Genoa is going to come down to the last fucking matchday, isn’t it? Those guys are just NOT going to go away.

Sorry, everybody. I have to get back to work. I’ll try to throw something else up later this week. (Rumors are starting to fly about this summer, so it should be fun and easy to mock those.) In the meantime, its time to start thinking about Catania.