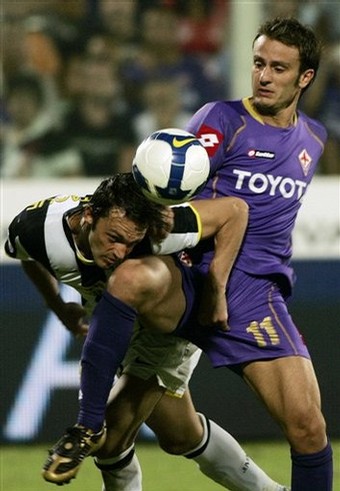 Viola fans around the world will be in a celebratory mood on Sunday. It will be a chance for the home fans to fill the Franchi and salute the players for a strong end to an inconsistent season. The Viola have achieved 4th place and have the opportunity to leapfrog their opponents, AC David Beckham (ACDB) for the 3rd and final automatic berth in next season's Champions League group stages.

We'll have plenty of time next week to review the season bit by bit, but Sunday provides Fiorentina with a wonderful opportunity. All of the pressure will be on the visitors, as they will have to try and hang onto 3rd place. Fiorentina can attack with gusto, hoping for a repeat of the performance a few weeks ago against Roma, as a 2 goal victory will give Fiorentina the better head to head record against Milan.

The one player that scares me to death for ACDB is the young 19 year old striker, Pato. He's had 2 games against our beloved Viola, and scored the winning goal in both for a pair of 1-0 victories for ACDB. His pace and precision have created problems for Fiorentina defenders in previous matches, and aside from Gamberini, I'm not sure anyone in purple will be able to stop him come Sunday. Bassy will have to be ready and sharp, and could need a repeat of his heroics against Lecce last weekend.

For the good guys, Melo and Dainelli are out due to suspension. Dainelli's is due to yellow card accumulation and Melo's due to his anger management issues. Mutu had surgery to correct his recurring elbow injury, Santana is recovering from his knee injury and Bonazzoli is not fit for the game. It looks like Prandelli's main decision will be whom to pair with Monto in central midfield. His main options would be Kuz or Donadel, and because Fiorentina have nothing to lose and can leap into 3rd place with a victory by 2 goals, I'm betting that Prandelli will opt for the better offensive player, Kuz, and we'll see Donadel as a 2nd half substitute.

For the visitors, the pretty boy may not be able to go due to a sprained ankle. And, the big story is the fact that this is the last game for the great Maldini, could be Kaka's last game before heading off to Real Madrid, could be Ancelotti's last game before trading the insane boss Berlusconi for the insane boss Abramovic and, well, I think that as an American football (and MLS - specifically DCU) fan, I've already heard entirely too much about the pretty boy to devote any more blog space to him.

ACDB: Dida; Zambrotta, Favalli, Maldini, Jankulovski; Beckham, Pirlo, Flamini; Kaka, Inzaghi, Pato - If Beckham can't go, I suppose we'll see Seedorf, who I must confess to having a soft spot for, even though at this point he's nothing but a past-his-prime mercenary. But a mercenary who has scored many fantastic goals, done wonderful humanitarian work, speaks many languages, used to have sweet dreads and I believe will be playing in MLS in the very near future.

Good news on this front, as FSC will broadcast the game live beginning at 9am EST. As an aside, I will be in lovely Burlington, Vermont for a wedding this weekend. Some rudimentary google searching has turned up no leads, so if any of you lovely readers out there know of a spot that would be open at 9am on Sunday and broadcasting the match, please let me know in the comments. Obviously I'm planning on setting my DVR for the match, but it being the last one of the season and with the chance to leapfrog ACDB in the standings, I'd like to work through the post-wedding hangover by watching the match live.

Well, by know it is obvious that I pick the Viola to win every week. Fiorentina are at home against a team with a lot of question marks, and with nothing to lose. I see the Gila Monster getting his revenge with 2 goals, and Jo-Jo making Ted very happy with one. Pato, because he always scores against us, will bag 1 for the visitors. 3-1, 3rd place and an auto-bid into the CL group stages for AC Fiorentina!