Viola 1 – Samp 0: Plus, Confirmation Pazzini is a Superhero!

Share All sharing options for: Viola 1 – Samp 0: Plus, Confirmation Pazzini is a Superhero! 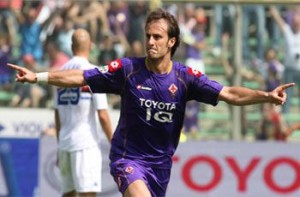 Today in beautiful Florence, mighty Fiorentina defeated a Sampdoria team that, according to the English language announcer I was listening to, already had their flip-flops on for summer vacation. Thank you fellas. Regardless, the win puts us five points up on feisty Genoa with two left to play; it also leaves us just a point behind the hideous Newcastle United. With any luck we could secure our ticket to the Champions League by next weekend. It’s a sweet week to be a fan of the viola.

This week also witnessed the return of old friend Giampaolo Pazzini to the Franchi. After his initial scoring run when he first moved to Samp, some watchers speculated that Pazzini was so good he might have superpowers. Well, today proved that was technically correct, but the superpower in question was invisibility!

Thank you, folks. I’ll be here all night. Don’t forget to tip your waitress.

Here are a few other thoughts from the game:

• Despite the, uh, lack of fire in the bellies of the Samp players, the main impression I had from watching the match was the professionalism of the boys in purple. They got their one goal, and it just felt like they were never going to give up the lead. Big change from even a month or two ago. They just seemed in command from beginning to end.

• When you win 1-0 you usually like the play of most of your guys, so not a lot to complain about on that front. Again, yes I know Samp wasn’t really effective in the last third. But the defense was solid, I liked Monto playing a little further back today, and Vargas continues to be a revelation playing up front on the wing. He is just fucking terrorizing people. When you see those low whipped crosses he specializes in, you don’t think they would be effective, but they’re getting the job done.

• Ah, my precious. It’s nice to be right about something once in a while. I bought stock in Steven back when he was selling for three bucks a share. (I also bought the personalized shirt.) Now he’s Microsoft, and people are calling him the “natural and obvious successor” to Mutu. I’m giddy.

• Bassy Frey. You know what, sideburns? You’re too good for France. Really. Fuck ‘em. They’re not going anywhere without you in the World Cup anyway.

• The folks who wanted to shitcan the Great Man have been a touch quiet lately. Winning four on the trot with a beat-up, overly-suspended squad will do that. Qualifying for the Champions League for the second year in row probably makes his job safe in my book.

• Christ, did anyone else wish to God they were in beautiful Florence today? It looked like it was about 70 degrees out, with the sun shinning over a Viola win.

• All we’ve got left are two Sunday matches: Lecce and the Beckhams. Obviously we will never be able to overpower the glory and majesty of any team featuring David Beckham, even if the other ten players were scarecrows. Or even if it were nine scarecrows and Douche Gattuso. But a win next week puts us in the Champions League.

Let me leave you with this on a very happy Sunday evening: If we do qualify for CL play again, who is the “Big Four” in Italy? I assume Newcastle United are in; if not they would cheat to get in anyway. Inter is in, and the Beckhams are in if only on the strength of their greatest-ever player, David Beckham. So who is the fourth team? Roma, the traditional answer? Lazio is a big club too. And of course Napoli is very, very well supported. Genoa has showed a bunch of heart this year.

Or, is it the club not mentioned who has risen from the depths of the league to qualify for Champions League football for the past two years….