Jo-Jo leads the Charge as Viola Increase Lead for 4th

Share All sharing options for: Jo-Jo leads the Charge as Viola Increase Lead for 4th 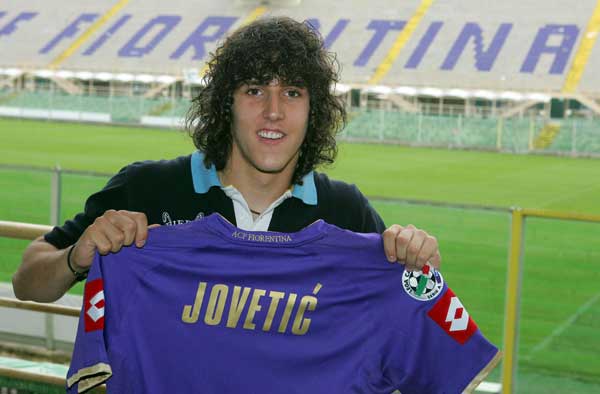 I hope everyone is still enjoying the excellent performance by the Viola in Sicily yesterday. If you are having a rough Monday, dig the highlights to cheer yourself up. I'm covering for Ted on this recap post, so I didn't take notes while watching the match yesterday. Here's what I can remember and what I've gleaned from the websites Uncle Sam's computer allows me to peruse on my lunch hour.

Fiorentina got off to a strong start, dominating possession initially. However, Catania showed good organization and it became clear that the Viola would have a tough time breaking down their defense using a deliberate build up. Almost on cue, after the Italian commentator on the pirated stream I was watching said the Viola needed to try to attack faster and more directly, the Gila Monster nodded a long ball down into the path of Jo-Jo who took one touch to control it before firing a laser beam into the side netting. Catania's keeper, Kosicky, who looked strong on the day overall, had no chance to get to it. It was Jo-Jo's first Serie A goal from open play and it was certainly a finish to remember.

From there, Jo-Jo pressured the back line and nearly took the ball off of Kosicky's feet and walked it into the back of the net. Also, Kuz had a couple of chances, and while he didn't convert them, he won praise from the Fiorentina offside commenters for not doing his usual and blasting his shots over the bar. Clearly, we'll take the progress where we can get it. Tedesco faked out Gamberini at the top of the box and should have equalized, but he put his shot wide of the post with Frey coming off of his line to challenge him. The first half ended with the Viola up 1-0, and they were deservedly in front.

After the half, Fiorentina spent the first 15 or 20 minutes trying to increase their 1-0 lead. This nearly paid off. Vargas and Monto went close with shots from outside the box. Jo-Jo forced an excellent reaction save out of Kosicky with a header off of an excellent cross from Pasqual. Also, My Main Man Melo almost volleyed a second-ball off of a corner kick into the net. After those chances went begging, Prandelli made all of his substiutions with an eye towards securing the 3 points. Donadel, Gobbi and Zauri came on for Kuz, Vargas and Jo-Jo, respectively. Aside from one header over the bar, Catania did little to trouble Bassy and the Viola back line. Then, in injury time, Gila Monster and Gobbi capitalized on a defensive error and Gobbi poked the ball into Zauri's path and Zauri turned and buried the ball into the back of the net. I have no idea why he was in Catania's penalty area in injury time, but he did well to put the result of the game beyond doubt.

After Zauri's goal, the entire team celebrated the hard-fought and well-earned 3 points together. Subs, coaches and all. It was great to see and it showed the collective spirit that has enabled the team to bounce back from the disappointing result away against Udinese and consolidate their fourth place spot. Overall, this was an excellent performance by Cesare and the boys.

After the late match on Sunday, things went almost as well as Fiorentina could have hoped for. Juve, aka Newcastle United, drew at Milan, Genoa salvaged a point on a late equalizer against 10-man Atalanta (well done second-rate Nerazzurri) and AS Roma officially eliminated themselves from CL contention with a draw at Cagliari. Here's how things stand at this point.

Fiorentina can secure 4th place by taking 6 of the 9 remaining points. I read this on C4 but can't get that site to load at work, but that must mean that Fiorentina's results against Genoa are the tiebreaker. We have a 1-0 home win and the 3-3 away draw (and Mutu's hat-trick) to thank for that. Understandably, Cesare is focued on the 4th place, but I don't think we can completely rule out 3rd.

As it stands, Juve are faltering badly, having failed to win since March 21 against Roma. The remaining matches for them are home against Atalanta, away to Siena (they'll win this because those second-rate Tuscans always roll over for Newcastle United so the can get players on loan), and home against Lazio. It will take 9 points from Fiorentina and less than 2 victories from Juventus (we have a 1-1 home draw from the first match and the 1-0 defeat in Turin) for this to happen, but these are certainly teams moving in the opposite direction.

Lastly, the next match is the Petulant Pazzini, potential viola target Paolombo and Sampdoria coming to Firenze. We'll monitor the Coppa Italia final on Wednesday, as Samp will be focused on that match, as they are neither in any danger of being relegated nor in range of a Europa League place. So, other than the motivations of Pazzini, they won't have much to play for after Wednesday.