Time to Take Care of Business against Torino

Share All sharing options for: Time to Take Care of Business against Torino 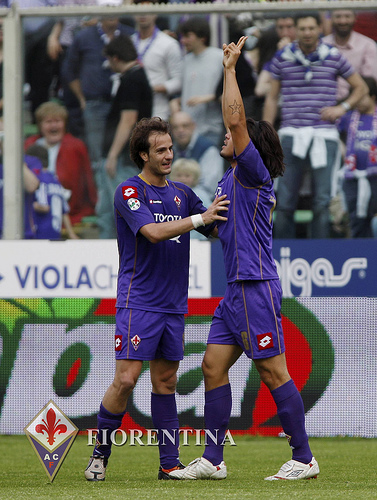 Fiorentina's weekly massive Serie A match is fast approaching. On Sunday afternoon, 17th place Torino will travel to the Artemio Franchi to face off with 4th place Fiorentina. It looks like it is going to be a beautiful spring afternoon in Firenze, so we will hope that Fiorentina can entertain the Franchi faithful with a nice home victory.

As I alluded to in the comments section of the previous post, this pits one of Serie A's best home teams against the league's worst road team. Fiorentina are tied with Inter for the second best home record so far this season, while Torino are the only Serie A team without a win on the road this season. Although, to be fair, Torino are coming off of a key 1-0 victory over Siena which puts them 1 point above the drop zone.

Marco Donadel's shirt tug on De Rossi last week puts him at the limit, so he's out for this game. Fortunately, this is mitigated somewhat by the news that My Main Man Melo will be back for next week's game. The usual suspects are still out injured, with Santana and Mutu still nursing injuries. At this point, I haven't seen anything about who Cesare has named in his 18 for this game, so I have no idea whether Old Man Jorgensen and his glass legs will be ready to go at this point. It looks like his fellow Dane, Kroldrup will be healthy enough for the bench.

Sunday's match will be an interesting one to watch. Right now, Fiorentina are in the position they want to be in as far as qualifying for the Champions League. Win, and they're in. The emotional victory over Roma last week was very important and I'd be lying if I said I wasn't slightly concerned that there will be a bit of a hangover from that result. And Torino, while not particularly strong, are a team fighting for Serie A survival. Plus, they have a couple of guys capable of scoring a goal, in Rolando Bianchi and that short bald guy who dribbles pretty good, Rosina. Either way, I think Prandelli will have the fellas ready to go come Sunday afternoon.

(3-4-1-2): Sereni; Rivalta, Natali, Franceschini; Diana, Barone, Saumel, Ogbonna; Gasbarroni; Bianchi, Stellone. Personally, I think goal are idiots for suggesting that Gasbarroni is going to play behind the strikers when Rosina is apparently healthy. Does this coach want to get relegated? At this point, Torino have exactly 2 dangerous players, Bianchi and Rosina. I can't see them getting a point in Firenze without big contributions from those two.

Fiorentina: I see Cesare changing very little from the lineup he put out last week. The only real question is who will play alongside Monto in the deeper-lying midfield spots. I guess Jorgensen would be a good option, but we have no idea whether he's fit enough for a start. I think Prandelli's best option is to play Kuz there.

No dice this week. We'll meet back here around 9:00 am on Sunday and do our usual exchange of various pirated internet feeds. Awesome.

Let's face it, Fiorentina are the much better team and Torino are simply turrible on the road. I'm going for a convincing 4-0 victory for the Viola. The goals will be spread around - I'll say one for Jo-Jo, one for the Gila Monster and both wingers will get in on the action. One each for Vargas and Semioli. Forza Viola!