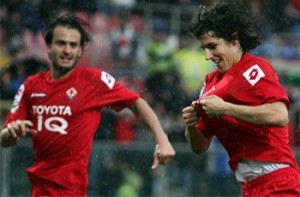 Today mighty Fiorentina defeated a feisty Atalanta club 2-1, coming back from being a goal down, and signaling to the rest of Serie A that the race for the fourth and final Champions League spot is far from over. The win, on the road, was particularly impressive, seeing how Atalanta is a solid home team and the good guys were beset by injures.

(I always have a surge of nostalgia when I watch Atalanta. They were the first team I ever saw the Viola play live. Curiously enough, I also saw them playing Fiorentina when a young man named Giampaolo Pazzini got a start in place of an injured Luca Toni. He got a brace, and I predicted big things for the kid. Does anyone know what happened to him?)

In his preview of the match, Tim hoped for a draw. I think that was all any of us were hoping for; with Gamberini, Melo, and Adi Mutu all missing the game, it seemed realistic to hope for a “grind-it-out” 0-0 draw, especially with the scoring woes the club had been showing us in recent weeks.

Instead, I was impressed with the Viola’s attacking flair. I admit: I did not see the first half; my little boy has been a bit sick this weekend, and taking care of him this morning came before the game. But I liked what I saw in the second. Gila seemed back to his old opportunistic self, the player we all wondered at in the first half, and the player who convinced us we could live without Pazzini. My Precious, who sometimes receives a lot of stick on these boards (some deserved, some not) continues to do what made me really start to like him in the first place; he runs right at defenses and creates havoc. (I was happy to witness his first goal for Fiorentina, even if it was not the greatest penalty I ever saw.) Semioli was quietly effective out wide, and while neither Monto nor Kuz is playing they way they should, they did seem to play the game with a bit more confidence this week. Even the back line, mangled with injuries and suspensions, looked OK. This was a game that gave me hope.

As I said, I was primed to have a tough weekend. The worst news of the lot was that Adrian Mutu’s knee swelled up badly after the internationals, and that he is scheduled tomorrow to have what is being alternatively described as either “exploratory” or “keyhole” surgery. Wrap it up any way you want to; if the phrase has the word “surgery” in it, I am officially worried. I’ve heard a lot of things over the last few days, most of it not really backed by facts, but word on the street is he’s out somewhere between four weeks and the rest of the season. Christ. More on this when we get some decent info.

In the meantime, we hold onto 5th place, two behind Genoa and three in front of Roma, who both won this weekend. We’ve got Cagliari at home next, chased by Udinese away and then the big one vs. Roma at the Artemio Franchi. We’ll see what happens this week with Adi, but tonight I go to bed optimistic. We picked up a tough and much needed three points today. That’s all we can do. If Prandelli can bring this beat up (both physically and physiologically) club back to the Champions League next season, perhaps more people will start nodding knowingly as I refer to him as the “Great Man.”