Share All sharing options for: Tricky Trip for Short-Handed Viola 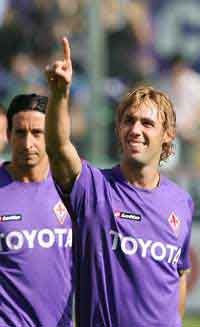 It's going to be a tough one, no doubt, as the Viola travel up north to Bergamo for the match-up against Atalanta. Cesare Prandelli is without his 3 best players, as Gamberini, Melo and Mutu have various injuries and illnesses. Melo came back with a temperature from his international duty with Brazil (and his first goal for the Selecao), and Mutu injured his knee while on duty with Romania and will need to have exploratory surgery to determine the extent of the damage. Gamberini is out due to a yellow card suspension. C4 has the details here.

Also, the more you read, the worse it gets. Apparently, neither of our Danish players are healthy enough to make the trip either, and Massimo Gobbi and Gila are fighting to get back to full fitness for the match. Soccernet has the sad story here. I literally have no idea who will play center back with Dainelli now. Crap.

The other nerazzuri sit in 10th place currently, but that disguises the fact that they are a tremendous home team, as Inter, among others, can attest. The full table shows that they have only one loss at their home ground. As far as danger men, the Viola are off the hook as our old friend Bobo Vieri has terminated his contract and will not be around tomorrow for the match. Other than that, I have not seen a ton of Atalanta this year. They are a strong team and typically rely on the physical play and experience of their target striker, Doni. Also, as a former player for Atalanta's youth teams, Riccardo Montolivo will want to impress.

Why this one matters:

Well, obviously the chase for 4th is well and truly on. Fiorentina are coming back from the last big break and will need to rack up as many points as possible from the last 9 matches. Marco Donadel's comments in the above-linked soccernet preview show the proper attitude and the fact that the team are aware of the task in front of them. There are enough points out there to be won, now the players will have to take care of business.

I'm going to pray that we don't see Almiron tomorrow, but considering the current injury situation, I suppose that is possible. At the bottom of this link are the players who made the trip and it looks like Gobbi will be out. I'm guessing we'll see the Gila monster at some point in the second half.

I see a tough one, and hopefully with a depleted side the Viola can scratch a point. I'll go 1-1 with Gila for the good guys and Doni for the bad guys.

This one starts early, at 7am EST. Serie A matches are all on Sunday this week on account of the International break. No USA television. If you're up and watching on a feed, kindly post it here. I'll be running a race, so I'm going to miss this one, unfortunately. FORZA VIOLA!

Also, welcome to Dumitru. I'm thrilled to have another member of the team here at the Fiorentina offside.