I Cannot Spare This Man; He Fights.

Share All sharing options for: I Cannot Spare This Man; He Fights. 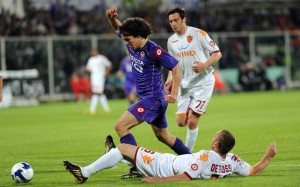 During the American Civil War, the President of the United States, Abraham Lincoln, was advised to dismiss one of his most successful generals, a man named Ulyssus Grant. Lincoln was told that Grant was incompetent, ambitious, and a drunk. (All three of these things were untrue.) But Lincoln needed more than anything to win the war, and he told Grant’s detractor in no uncertain terms that his general would keep his job; not matter what ever other faults he might have, Lincoln said, Grant took the war to the enemy. “I cannot spare this man,” he said. “He fights.”

As my son and I joyously watched today’s 4-1 demolition of Roma by our beloved Fiorentina, I remembered Lincoln’s words as I watched a young boy named Steven Jovetic utterly destroy a tired and old-looking opponent. Jovetic (or “My Precious” to the cool kids) played for 71 minutes today and dominated ever moment of them. With the ball at his feet he attacked Roma, running strait at them and, in a footballing sense, punched them right in the nose. His passes were pinged directly to the feet of charging teammates. He intercepted any number of passes and even dug in on some well-timed tackles. He didn’t have any assists today, but he constantly made what the English football writer Richard Williams once called “the pass that led to the pass that made the goal.” It’s the kind of play that may not show up on the stat sheet but is obviously critical to those watching who know the game. To borrow a phrase from American baseball player Reggie Jackson, My Precious was “The Straw That Stirred The Drink.”

It’s easy to criticize Jovetic, and I find myself defending him fairly often. Among other criticisms, fair or not, I’ve heard that he dives too much, doesn’t score enough, is all flair and no substance, and that he has the haircut of the rhythm guitarist from a mid-1970s German pop band. (That last one is probably fair.) I’ve always defended him because of his age, which is legitimate. The fucking kid is only 19. God only knows what pointless bullshit I was doing at 19. Watching him today, however, I came to realize that we were almost winning a double victory by having him on the field. When we signed him last year, I thought he would play maybe 10 minutes a game most of the season. Now, with the great Adrian Mutu hurt, he is playing 70 a game and cutting Roma to fucking pieces. So not only do we get the win today, but we get the “win” of this kid earning more experience now, lessens that he doesn’t have to learn down the road. Like I told a pal I was talking to today: if you think today’s match was good, just think of how he’ll look in, say, four years, when he will reach the decrepit and elderly age of 23. Regardless, after watching him run strait at Roma for 70 minutes today, I shall not defend him via his age anymore. I will simply tell people “I cannot spare this man; he fights.”

Jovetic won my attention today, but the rest of the club too deserves credit for an inspiring and gutsy win, earning the club three points and (temporarily, at least) the fourth and final Champions league spot. I liked Vargas in that kinda “fusion” spot which had him all over the field, and his goal was sweet. I continue to like Semioli’s consistency and hustle down the right. Donadel is clearly Melo’s backup but did a nice job in front of the four, and I really like how Gamberini commanded the back today. I also like Pasqual quite a bit. Gila’s finishing continues to be unparalleled.

Mostly, though, I liked the team’s heart. After last week’s loss (which was the first Viola game I did not see in an age) many, including me, were disheartened and worried that the season might be slipping away. The club could certainly have used injuries and suspensions as an excuse to let this one slip by them, but they clearly grabbed it by the horns. With the blown penalty calls they could have had six. Yes, it’s true, there were some shaky moments at the back, but I think we’ve all come to realize this is the back four we have, and we can’t do anything about it until this summer. We’re just going to have to accept those shaky moments.

It’s going to be a dogfight on the way in. Roma looks done and dusted after today (they might have some major retooling in front of them, with Totti not getting any younger and all) but Genoa has plenty of fight left in them. Both teams have schedules that potentially allow them to build some points as we come home. Whoever does a better job of stockpiling those points will get the 4th spot. But right now, I like our chances. I or one of my fellow posters will get some sort of look at the upcoming schedule up on the boards this week.

Where the hell can I get one of those badass navy blazers with the Viola logo sewed over the left breast pocket like The Great Man wears? Can you buy them in stores? If so, send a brother a link in the comments section. Or do I have to just buy a standard blazer and get my old lady to sew a Fiorentina patch on the pocket? Because I would wear that goddamned thing four days a week if I could get one. I’d even break it out with the purple turtleneck underneath like Prands does. Somebody help me out. Slakas, this sounds like something you could dig out for me.

I feel like I’ve barely scratched the surface of what a great, exhilarating, fun match it was today. I haven’t felt so good after a match since we pounded Newcastle in Turin last season. I wish I was in beautiful Florence on my third bottle of wine. Regardless, as I always say after a big win, THIS is why we are sports fans. Enjoy it.