4th Place Challengers Face off at the Franchi

Share All sharing options for: 4th Place Challengers Face off at the Franchi 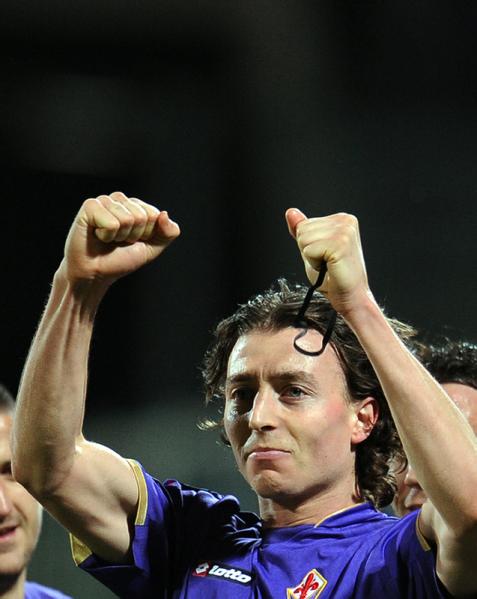 Well, it all comes down to this. Tomorrow night, we will know if either Roma or Fiorentina are going to be able to overtake Genoa for the 4th and final Champions League qualifying spot. The Artemio Franchi will be packed to the rafters and it will be interesting to see if these two teams, both of whom like to go forward, will be aggressive or conservative given the fact that the "stakes is high".

Both squads will be fielding far from their ideal starting elevens tomorrow night. For the visitors, Doni (this may actually be a good thing for Roma and a bad thing for the Viola), Cicinho, Juan, Aquilani and Menez are out injured and Mexes is out because he's a punk ass bitch (or serving a red card suspension, whatever). Jo-Jo's Montenegro teammate, Vucinic, is doing his best to get ready for tomorrow's game despite not having played for a month or so. For the good guys, Santana is still gone and sorely missed, Mutu is not ready to come back yet, and Jorgensen is too old or something. Plus, Melo's appeal has not been addressed so he's still serving his suspension for his anger management issues. Unfortunately, Almiron will be there and I will be stopping by Church on the way home to light a candle in the hopes that Prandelli will keep his sorry ass on the bench.

Also, it has been a contentious week in Firenze. Many vocal fans were upset with the loss at Udinese on Sunday, and various banners have been displayed. Monto's response was well reasoned and I can only hope the sometimes fickle Franchi crowd will be fully behind the team tomorrow. They're going to need it.

I'm writing from work, and Uncle Sam's computers are so antiquated that I can't load a lot of the sites I like to read before writing my preview so I'm going to go with some bullet points on this one. I'm going to do 2 categories - reasons I'm confident about the game and reasons I'm scared about tomorrow.

- Frenzied Franchi crowd behind the home team.
- It looks like Roma is starting Riise at CB due to injuries. He's almost as awful as Dainelli.
- Monto's back.
- Home form - The Viola have secured 35 of their 55 points at home this season, with only 2 losses.
- Gila Monster. His effort impressed me against Udinese, and he nearly made a goal out of nothing in the second half. Its time for him to remind us why the team of Prandelli/Corvino/Della Valle opened up the checkbook last summer.
- Bassy. I could elaborate, but is that really necessary?

- Frenzied Franchi crowd panicking if something goes wrong early.
- Strong, fleet footed Julio Baptista exposing the weak Viola back 4 in the same way that that diving punk Sanchez did last weekend.
- Totti. I hate his guts for reasons too numerous to list right now but he knows what he's doing on the pitch.
- De Rossi shooting from distance - Donadel and Kuz need to stay tight to him otherwise Bassy might be in for some problems.
- Lack of creativity from the Viola midfield without the Melo, Santana, Mutu combination.

Fiorentina: At this point, Cesare has to get his best 11 of the available players onto the pitch for tomorrow. Here's what I think he should do. 4-2-3-1 formation. Bassy; Pasqual, Dainelli, Gamberini, Comotto; Donadel, Kuz; Vargas, Monto, Jo-Jo; Gila Monster.

Hell Yeah! FSC will broadcast the game live at 2:30 pm EST tomorrow. No choppy internet feeds for the first time in quite awhile. Since the Inter game, I believe.

I think I've made it clear that I'm an optimist regarding the Viola. I think the crowd will ultimately be behind the team tomorrow and Fiorentina will pull out a close one. 3-2. Gila Monster, Monto and Jo-Jo for the Viola and Totti and DeRossi for Roma.

See you all back here during the game. Forza Viola!