My Main Man Melo beats down Lopez, both banned 5 matches

Share All sharing options for: My Main Man Melo beats down Lopez, both banned 5 matches 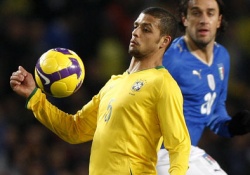 So I just recently noticed in the comments that the Italian league handed down its decision. The resulting 5 game ban is much worse than we feared when this story first came out after the match on Saturday. I actually cursed a little too loud at my desk, prompting my annoying and overly nosy colleague to ask me if everything was ok. I made up some excuse to get her off her back, but Cesare Prandelli must be holed up in his office trying to figure out how to address this issue.

Ok, so Cesare has been shifting his formation this season, based on availability of players. There have been variations on a 4-3-3, a 4-3-1-2 and a 4-4-2. Either way, I'm going to take a stab at 2 ways Fiorentina can lineup their 6 attacking players for Sunday's away match with Udinese. For both, I'm assuming that Pasqual has nailed down the LB spot, and that both Prandelli and Vargas are open to the Peruvian being deployed in midfield.

Personally, I lean towards choice 1 for the following reasons. Jorgensen is an excellent, creative and massively experienced player. Donadel is a battler who will be equal to Melo in terms of breaking up the opposition play and his spirit will be an important inclusion in the fight for 4th place. Also, his assist on Vargas' goal aginst Cagliari showed that he has at least some abilities going forward, even if they pale in compairson to Melo's. Plus, Monto has not fared well when he's been deployed further forward, making me think he's not the best choice for the trequartista position. Of course, this assumes that Jorgensen is fit enough to play from the start of the game, which is far from likely considering his limited minutes this season.

Challenge to the Viola Midfield

As my buddy Paul likes to say, illregardless of what Prandelli decides for the lineup, some players are going to need to step up. For me, I'm looking to Kuz and Monto to take more of the responsibility on their shoulders. Melo has been the only Viola midfielder this year who has been consistently good. Without him for at least the next few games, Kuz and Monto are going to need to provide service to the forward and/or get a couple in the back of the net themselves. Otherwise, there may be no Champions League football for the Viola next season.

Forza Viola and go ahead and start disagreeing with my lineups in the comments. Or, we can just commiserate about punk ass Uruguayans baiting my Main Man Melo into a fight in the bowels of the Stadio Artemio Franchi. Also, if anyone has any insight on the appeals process, please let us know. Thanks.