Fiorentina 2 – Cagliari 1: Plus, Some Easter Tidbits!

Share All sharing options for: Fiorentina 2 – Cagliari 1: Plus, Some Easter Tidbits! 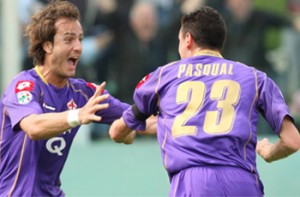 This being the Holy Weekend and all, I would like to begin by wishing a very happy Easter to all of our Christian readers out there. To all of our Jewish readers, I hope you had a happy and safe Passover. If there are any atheists out there, I hope you had and continue to have a pleasant and productive weekend. And if there are any Juve fans reading this: get a life, you ugly pieces of shit. I’ve never seen anything quite as hideous as those embarrassing black & white stripes. You look like escaped convicts from a 1930s road comedy starring a youngish Bob Hope. Only instead of having wacky, funny adventures, you suck.

Before starting today’s match recap, I thought I would address some of the news coming out of the Viola camp this week, and specifically highlight what is true and what is made-up jive.

• Viola Star Man Adrian Mutu is injured and will be out for a while: TRUE. On Monday Mutu’s “exploratory surgery” reveled that the striker needs at least a few weeks before he can play again. He may be back in three more weeks, or he might not come back this season. Frankly, both options give me a stomach-ache.

• Adrian Mutu was apparently not too injured, since he was able to get Alessandro Gamberini’s girlfriend pregnant: FALSE. Apparently that is a made up rumor. But a fun one.

• The Great Man is no longer speaking to the players on the team: FALSE. However, that rumor is more worrisome. When stuff like that starts sneaking out, even when untrue, you know there may be chemistry problems on the club.

• Felipe Melo beat up some poor sap in the tunnel after today’s game vs. Cagliari: TRUE. Melo apparently beat the shit out of Diego Lopez. Although kind of awesome, this stuff is frowned upon, especially by the great man and the Viola ownership, who are justifiably proud of the “good guy” rep that Fiorentina have earned. So we will see how this all shakes out for Melo. Who is still a badass.

Okay, aside from Melo throwing a beatdown on Lopez, today was another successful step in our goal of getting the fourth spot in the league. Our win keeps us in fifth place, and on pace with the continually impressing Genoa, who beat Newcastle like a drum today. Roma coughed it up in the big Derby vs Lazio, which means we sit six in front of the Romans, and remain two behind Genoa. Credit where credit is due: regardless of Newcastle’s all-around suckiness, Genoa keeps on winning. They are certainly worthy opponents as we come into the home stretch.

As to today’s game: I can’t say much about the first half, since I didn’t see it. As usual, the family, and particularly my kid, came first. But I caught all of the second and was treated to a thrill-a-minute roller-coaster ride, even if I spent a few nervous minutes making bargains with God.

I particularly like how the team has won without Adrian Mutu. For the first time this season the club is showing real heart. The star of this match, in my mind, (and yes, I know I’m biased) was Jovetic, who spent at least from the start of the second half until when he was pulled in the 75th running strait at the Cagliari defense, wrecking havoc, beating defenders, winning free kicks and setting up the first goal, nicely taken by Pasqual. I also though Gila did his usual yeoman work up front, and Semioli had another quietly efficient match. Melo was fine as the stopper in the midfield, and Monto was again OK, although Kuz didn’t show me much. Donadel, who came in late as another midfield stopper, launched the picture perfect cross-field pass to Vargas that led to the second goal. That was about as nice a pass as you will see in football and reminded me of a very similar pass Zinedine Zidane once launched to his leftback (Roberto Carlos) for a similar goal when they both played for Real. But I digress.

The only real worry today was the defense, which looked shaky all day, even when Cagliari went down to ten, and then nine, men. (I am excepting Bassy Frey, who was sublime, and would get an 11 if rated on a 1-10 scale). Our centerbacks continue to be the most worrisome and stomach-ache inducing part of the club. The first player we should buy this summer is another centerback. The second player we should buy is ANOTHER centerback. (Although Ivanovich might be off the table the way he is playing for Chelsea). Anyway, there’s not much we can do about it now. We have to play the cards we are dealt.

So, on this holiest of weekends (except, perhaps, for the weekend of the opening of Serie A and maybe the weekend where they play the Champions League final) we should gladly accept the gift of this win. A few weeks ago I was beginning to think that our beloved club was losing heart; now I know we’ll be in it to the end, fighting hard for that fourth spot. As a fan of any club, that’s all you can ask for.

Forza Viola, everyone. Have a great weekend.