Share All sharing options for: Pink Guys vs. Purple Guys 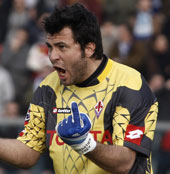 Tomorrow afternoon at the Artemio Franchi, two teams suited up in very manly colors will take the pitch. Palermo will be wearing pink and white while Fiorentina will be kitted out in the home viola.

Another Sunday means another massive Serie A clash for Fiorentina. I realize I say this every week, but I'm not ashamed. I will continue to do so until our CL qualification is ensured. Today's results make our home match tomorrow even more important. Roma were held to a 1-1 draw at home to Udinese and Inter got up off of the mat after the piss poor performance against Sampdoria in the Coppa and beat Genoa 2-0. So, 3 points tomorrow would be massive. It would put Fiorentina 4 points clear of those teams in 4th place, pending Milan's result of course.

Obviously, Palermo have several dangerous players. I remember all too well Cavani's goal when he was making his debut against us. We know Liverani is an excellent distributor, and Simplico is dangerous with the ball at his feet and ex-viola Miccoli can always pop up with a goal as well.

However, Fiorentina have nearly the entire first 11 healthy and are playing at home. The results for the teams chasing us are in and Prandelli will have the team fully prepared because there were no mid-week games. This is a game a top team in Serie A has to win. If we are going to be one of those teams at the end of the season, we need to get a victory tomorrow.

Last I checked, it was not clear whether Kuz or Commotto would be able to go and Vargas is serving a yellow card suspension. I'm going to assume neither Kuz nor Commotto can make it, so here's what I think Cesare will put out tomorrow:

As for the visitors, hopefully the Artemio Franchi faithful will give a warm welcome to Fabio Liverani. He played a large role in the success of the team the past couple of years and it will be nice to see him back in Firenze. I'm going to steal this from C4

The game is supposed to air at 5pm EST on FSC. However, I was worried when I set my DVR to record the match and it said the stadium would be the Stadio Olimpico. This means that maybe they will re-broadcast Juventus' 1-0 win in the Torino derby or maybe Roma 1-1 draw with Udinese. Either way, I'm hoping to watch it at 5 pm but I might try to find a stream on the internets tomorrow morning just to make sure I see the game.

I've got faith. Viola 2-0. Gila Monster and Mutu, because no one else likes to score goals, apparently.

Forza Viola and I'll talk to all of you on the blog tomorrow.