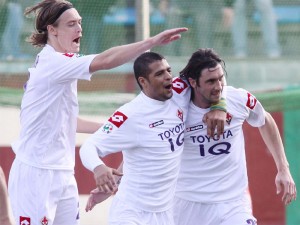 Yesterday, that hideous football club from Reggina drew Fiorentina 1-1 in league play. Since Reggina is, as I said, dreadful, that match can not be looked at as anything other than two dropped points. I’m not hitting the panic button yet by any means, (we are still in fourth place, after all) but unless the boys start picking up points pronto the Viola and her fans are going to have to start putting dreams of Champions League football aside.

In what is becoming a depressing and predictable development, I once again failed to see the match. I got up early, fed my son, did all of that, but when I sat down at the computer to watch the game, I found that all the feeds weren’t working. I don’t remember half this much trouble watching games last year, but this year it has been a bear. It seems like every time a game is not shown on TV, we only have a maybe 50% chance of seeing it online. Fans like me (who live in the states) are going to start feeling detached from our beloved club if we can’t seem them play regularly. Match reports and the ESPN Gamecast are simply not the same. Anyway, I ended up watching another game on RAI with my nine-month old son and his stuffed duck, Mr. Quackington. The company was great; the match sucked.

Frankly, what I should do is start a letter writing campaign to RAI and FSC, begging to inform that that don’t necessarily have to show every match played by Inter, Juve, and especially the fucking Beckhams. They were on frequently enough before they changed their name, back when they were known as AC Milan, but now that they’ve signed their greatest-ever player it seems like the aforementioned stations televise every match, practice, walk-through and team meeting of the Beckhams. I think they even have a live tracker at the bottom of the screen to let us know when Emerson takes a shit.

Anyway, I can’t say too much about the match. The write-ups indicate that we attacked quite a bit (although Reggina got their licks in two) but that we couldn’t really finish. Bonazzoli got the goal for us (good for him) and Bassy made some great saves. What is most clear, however, is that this was a winnable match for us, but we ended up dropping two points.

There were two other quick hits from the match; one was that Prandelli said something to the effect that “He couldn’t go on like this” with all the criticism being levelled against him. I won’t go into this further because we’ve discussed Prands to death this week. The other point made was that Bassy thought the recent negative attitude towards the team and especially Prandelli was hurting team spirit, and that the club was essentially carrying the negativity onto the field with them. If that’s true, it is certainly more problematic.

Our schedule slows down a little bit over the next weeks, as the club is out of all cup competitions. (This is a bummer, especially because of my often-expressed like of the UEFA Cup, but it will give Tim and me a bit of a breather.) On consecutive Sundays we next have Palermo, Inter, and Siena. I would love to get six, if not seven, points from the next three. We’ll see. But the coach has plenty of time to work with the team, so we will have the opportunity to see how they respond to the pressure.

If we get a chance Tim or I will be back with a mid-week news post. Otherwise, we’ll be back this weekend with the Palermo preview. Hope everyone is well, and Forza Viola.