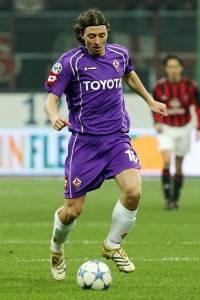 This will be a brief preview, unfortunately. I've had some computer issues this week so I haven't been able to keep up with the Viola blog duties the way that I want to. Siena are coming to the big Stadio Artemio Franchi in Florence for a key game for both teams. In addition to the local bragging rights, there is a lot on the line for both teams. Siena sit seven points clear of the relegation zone and will be hunting for additional breathing room and as Roma is being thumped at home by Juventus as I write this, Fiorentina have an excellent chance to distance themselves from a rival for the last champions league qualification spot.

Nothing major to report on this front for Fiorentina. I think Prandelli will stick with a similar lineup that he used against Inter last week - though I agree with several comments that suggested the 4-1-3-2 formation would perhaps be more effective with Melo playing in front of the defense and Old Man Jorgensen playing behind the strikers.

The next 3 matches for Fiorentina are massive. Next week is away to Atalanta and then the following that is a visit from Cagliari. Plain and simple, 9 points are necessary to keep the goal of 4th place within reach.

Looks like no broadcast in the USA. As usual, we can discuss various streams in the comments section around game time, which is 10:00 am EST tomorrow.

Siena have been a tough opponent for Fiorentina the past couple of years and I'm sure they will be motivated tomorrow to try and recover from the 5-1 hammering Milan put on them last week. But, I think that the tide has started to turn for Fiorentina. At the start of the year, Fiorentina were getting results without playing well. Then the slump kicked in. Now, a solid performance against Inter will hopefully lay the ground work for the upcoming stretch where Fiorentina must start racking up points. I'm going to say a 2-0 win for the good guys, with a goal each from the Gila Monster and Mutu.