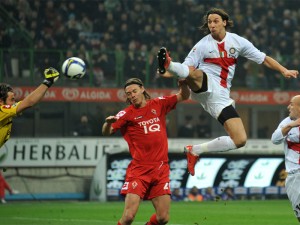 Yesterday in Milan brought grim tidings to the Viola, who were defeated 2-0 yet again, and falling for the first time in recent memory out of a Champions League spot. With the loss, Fiorentina now sit in fifth, at 46 points, tied with Roma, and two points behind Genoa. The boys have some winnable matches down the stretch, but they will have to improve their play massively if they hope to reach, once again, the Champions League.

I don’t want to make too much of this loss; Inter was at home, and we cannot forget how strong a team they are. I watched their CL match with Manchester United midweek very closely, and was impressed with how tough they played Ferguson’s team. (United is probably, at worst, the second best team in Europe.) So we shouldn’t exactly be hanging our heads.

Another mitigating factor from the match is that key mistakes were made by two of our best players, Bassy Frey and Adi Mutu. (Bassy is probably at least partially at fault for the first goal and Mutu could have finished much better). While their greatness doesn’t raise them above criticism, it also feels petty to too harshly judge the players who have been most important in getting us to where we are this season. In other words, I’m not exactly going to hold it against them.

Still, like others who watched the match, I felt as if we let at least a point slip from our fingers. Ibra’s first goal was sketchy (I concede his second was magnificent), we couldn’t finish yet again, and our midfield was less than impressive, a trend that is becoming more and more worrisome. Kuz and Monto, who, twelve months ago, were the dual rocks upon which we were to build our church, now seem to be little more than expensive liabilities in the field. For every laser beam that Monto fires at the opposing goal (and he did have a beauty yesterday) it seems as if we must accept in trade four or five botched passes. Frustrating.

Continuing, I liked Melo much better in the deeper, sort of classic Patrick Viera/Roy Keane circa 1999 role. I would have preferred Jorgensen to get another shot up front, although he was fine where he was. I also liked the back four, who did about as well as we could hope with a dangerous team. I thought Vargas in particular did well.

One aspect I found especially disconcerting was our level of fitness; I reckoned that after the midweek match it would be Inter who would be gasping for breath by the middle of the second half. Indeed they were, but so was the Viola, even with their schedule clear. Yes, it was a tough, physical, back-and-fourth match; but I thought we could have an advantage here.

Still, what is done is done. Inter was the better team and undoubtedly had the best player on the pitch in Ibra. They got the three points, and we must move on.

We next (after the break) have Siena, Atalanta and Cagliari. No prizes for guessing what needs to be done: nine points from three games, or we need to start having serious discussions of the UEFA Cup. But I’m not ready to thro in the towel yet.