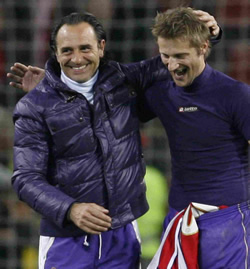 Another Sunday, another massive game for our Viola. I waited to put this up until all the other games were complete, so we could really see what the importance of the match would be. Genoa got a win yesterday, Milan thrashed Siena away, and our boy Giampaolo Pazzini's double held Roma to only one point. Here's the current table, showing us level on 46 points with Roma and 2 back of Genoa in 4th. Obviously 3 points would be pretty nice, and the challenge of playing Inter at the San Siro is even tougher when you consider the home defeat against Palermo last week.

Let's talk about the opponents for a minute. Who knows what we're going to get from Inter, honestly. They put forth a decent effort at Old Trafford on Wednesday, but it was obvious over the 2 legs that Man U were the better team. Mourinho was brought in to get them to advance in the champions league, rumors are heating up that he's on the way to either Man City or Real Madrid, and all of these things might be combining to create a distraction for the Inter players. Plus, Fiorentina played Inter well at the Artemio Franchi in December, holding out for a 0-0 draw. And they're still 4 points clear at the top over Juve.

Obviously, this has been a week of soul searching for Fiorentina. Prandelli worked hard to build up the confidence of the team. Fiorentina need their swag back, and this game is the perfect opportunity to do it. Bassy's not scared. The Gila Monster is ready to go. The fans appear to have switched their tone from overly negative to a stronger show of support. I'm fired up - this is a huge game and I think the team will be ready.

For Fiorentina, no major injuries or suspensions will limit Prandelli's choices. I think Cesare's going to go back to the 4-3-1-2 with Old Man Jorgensen as the trequartista.

For Inter, I'm going to take it from Goal. All I know is that they are weak in the center of defense due to injuries. Gila Monster and Mutu need to get on that.

I'm always the optimist. I think we got this one - Fiorentina have all of the results in front of them and know what is required. I'm going to go 2-1. A goal from the ugly guy with the big nose for the bad guys, and, who else, Mutu and Gila moster for the good guys. Forza viola! I'm going to have to watch on DVR but I'll check back to see what everyone thinks later on tonight.