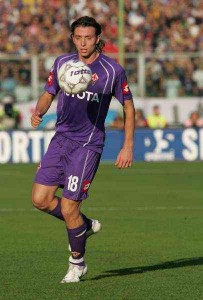 Once again I must begin a post about Fiorentina with an apology for not getting more stuff up sooner. Work is pilling up and I just never have time to write anymore. The free time I do have is spent with my little boy so he doesn’t grow up to be an axe murderer resentful of a dad who spent all his free time writing about a football team that plays more than an eight-hour jet plane flight away.

Still, I did find the time on Sunday afternoon to watch the Palermo match with a nice glass of wine (which quickly turned into 3/4ths of a bottle of wine), my little son, and his stuffed duck Mr. Quackington. My wife was in the next room reading but figured we lost 2-0 to the men in pink judging by the two wretched screams I produced in the second half. Anyway, she never needed to ask what the score was.

I was feeling good when the whistle blew to end the first half. I thought our play was inventive and attacking up front, I actually thought Jorgensen was pretty good in the hole, and the defensive-ish midfield (including both Donadel and Melo) left me cold when I saw the starting line-up, but I thought they played well in the first half. It also seemed like the back four had things well in hand.

The second half, as we all know now, was a different story. The club came out listless and played sloppy, without any fire or urgency. Montolivo, Gamberini, Gila, Donadel, and virtually the rest of the team were wither terrible (Monto) or indifferent and ineffective. They gave up one goal after the break, quickly followed by another. They never seemed to threaten the Palermo goal in the second half, unlike the first.

The club was booed off the field. After the match, players like Montolivo and Frey said they deserved it. The Great Man seemed tired and subdued. The team owner released a fiery statement to the press calling out the players and the club. In the days that followed players called for a renewal of team spirit and unity. All in all, it was a terrible beginning to the week in Beautiful Florence.

So where do we now stand? Remarkably, for all the negativity of the past few weeks, we are still in fourth place, albeit only a point in front of the increasingly formidable duo of Roma and Genoa. The Beckhams are now five points clear in third, so it now seems as if it will be a three-way dogfight for that final CL spot. With Inter at the San Siro coming up this weekend, things might get worse before they get better, but we need to get our act together soon.

What, then, is needed for us to finish the season convincingly? The answer for me, unequivocally, is better play from our midfield. Yes, the defense, and particularly our centre backs, continues to worry. But they are what they are. We’ve got no one to play with Gamberini, and either Gamberini is losing ground, or he is covering too much ground backing up for his teammates. Whatever, that’s not likely to change. But we have enormous talent in our midfield, only we haven’t seen it in the last few weeks.

Melo has been solid covering the back (and actually coming forward a LOT) but we need massive improvements from Monto and Kuz (assuming they still play regularly after this weekend’s embarrassment) and we somebody in the hole who can do some damage. I would still run out My Precious, because, as I said, he was always running at defenses and sending them back on their heels. True, he still needs more seasoning. But whether it is him, Jorgensen, Semioli, or Mario Santana on one leg, we need somebody to fill that spot and get the ball into Mutu and Gila. If those three (Monto, Kuz and the grab-bag in the hole) can step it up, we have a shot at fourth. If we continue to see play like Sunday, however, I will be happy even with a UEFA Cup spot.

I will endeavor to be back soon with more posts. Maybe when the economy turns around or something. In the meantime, send out a happy birthday wish to my co-blogger Tim, who turns (30? 85? 15?) tomorrow. Anyway, it’s his birthday, a fact I am only aware of because I signed up for facebook to be a part of our little facebook Viola family. Have one on us, Tim.