Share All sharing options for: Fiorentina 1 – Lazio Nadda: Back in CL Contention 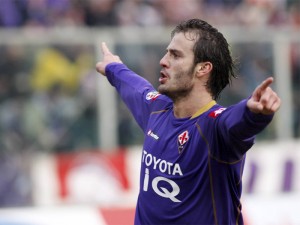 Today in Beautiful Florence the Viola defeated a gutsy Lazio squad 1-0 thanks to a last-gasp goal by Gila, which was created largely due to the industry and talent of the resurgent Adi Mutu. Everyone knows I’m a homer, and see almost everything from purple-tinted glasses, but even I recognized that Lazio damn near played us off the pitch today, especially after the Romans went down to ten men after only 17 minutes of play. A string of magnificent saves by Bassy Frey kept us in the game, however, the boys played significantly better in the second half, and the talent of our front line won the match in the final moments. I’m comfortable admitting that we were lucky today, but when a team wins the league or qualifies for the Champions League, that team needs a bit of luck. So I’ll gladly accept what happened and move on.

The three points, coupled with a few other important results this weekend, have thrust us back into fourth place in Serie A. It also gives us three wins on the trot and completely transforms our season after the string of bad luck we had to open play after the holidays. This is, of course, no time for complacency; things are still very tight at the top (Roma could be dog-fighting us for that fourth spot for the remainder of the season) but this win tells the rest of the league that we are a force to be reckoned with one way or another. With Mutu back and healthy, we are always a threat to score, and if Bassy plays like he did today for the rest of the season, than anything is possible. I think he saved three separate one-on-ones today.

A few other thoughts from the match:

• Mutu is making the difference. Even though no one other than Bassy played exceptionally well today, Mutu was certainly the dangerman for Fiorentina, creating danger from runs, crosses, and shots. It was his well-aimed shot in the 89th minute which he took only after shaking his defender which spilled from under Muslera and led to Gila’s goal. With better service from midfield he will, of course, be an even more dangerous threat.

• I didn’t like Monto in the hole at all. He did a terrible job of feeding the boys up front, and didn’t have any of his usual runs onto the ball for his well-aimed blasts that, when he is on his game, we see two or three times a match. I like him much better on the wing.

• Following that thought, I think our best lineup going forward is Mutu and Gila up front, with My Precious in the hole. Yes, he’s young, but it’s his natural position and we don’t have many other options with Santana hurt. That way we can play Kuz and Monto on the wings and keep Melo/Donadel for holding.

• Kuz, by the way, had a number of blasts go way over or wide, and it was pretty frustrating, but I’m glad to see the old offensive-minded Kuz of late last season. I will take the embarrassing stuff if we can get a few goals out of him.

• Sometimes I know I sound like a broken record: for instance, I am always dogging Santana. Along the same lines, I am also going to be perpetually defending Vargas. The announcer I listened to today was all over him about his crosses (not great, admittedly) but he still created danger on the wing, which was especially needed with Mutu playing inside and Monto in the hole. We didn’t get him to be a stay-at-home back, so we can’t be mad when he doesn’t play like one. He certainly wasn’t perfect today, but I’m not getting why he generates so much disgust among the faithful. Too much hype about the transfer, maybe?

• Zauri was terrible. I am comfortable saying that.

• The most striking impression I had from the match, however, was that the Viola simply were not playing intelligently. They never seemed to use their man advantage. One of the best ways to do that, I’ve always found, was to play gradual, build-up play, let the defense run around and chase you a little bit, and use your man advantage to get easy passes and, occasionally, easier shots. Fiorentina, however, simply kept lobbing balls up front before their midfielders could get into position, thus generally negating the advantage. I didn’t like it at all. Obviously the Great Man didn’t like it either, and things were corrected, to some degree, in the second half. Much of it is probably due to the lack of creative influence in the midfield, but I still expected more against a ten-man, struggling club.

Still, like I said, I will always take three points. They did what they had to do, which was get three points against a lower-ranked team at home. It was also sweet to get a little revenge after the whuppin they put on us earlier this season. Next we look forward to Genoa next weekend followed by Ajax during the week in the UEFA cup. Fun stuff coming up.

I received a very nice response from my call for a co-blogger for the club. Thank you to everyone who wrote me a note. I have received four or five emails from people who have volunteered. All of them seem like nice, smart people who really love Fiorentina, and I don’t think we could go wrong with any of them.

I am going to just leave this open for another day or so to allow anyone who wants to “apply” for the job to have a chance. Again, you can email me at ehutch01 (at) aol.com if you are interested. I will probably make my decision by tomorrow night or Tuesday, and we will have another Viola blogger by then. Thanks so much to everyone who has volunteered to help out.