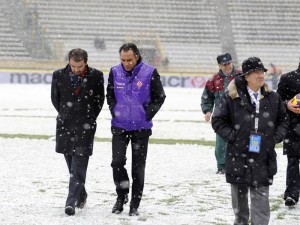 Yesterday in Bologna, Fiorentina defeated the home team 3-1 in a match that clearly demonstrated the value of star man Adrian Mutu to the team. With a sublime brace (Gila got the third late in the match) Fiorentina are back up to fifth place, a point in front of worrisome Roma and two behind Genoa.

As we all know, the game on Sunday morning was delayed due to a dusting of snow, and was played on Monday morning around 9:00AM EST. Bummer for me and for more than a few fans, I imagine, since I was just getting to work at 9 on Monday and hardly watched a kick of the game. The crew on the discussion boards did provide a feed (thanks, fellas) but it was in pretty rough shape and I couldn’t watch it anyway because of meetings, etc.

Since I didn’t see the game, I can’t really comment on what happened other than to pass along the big storylines from the match that everybody is reporting, such as:

• Mutu is the bomb. Not only did he single-handedly stop our goal drought, but he may have also got the GilaMonster back on track. Say what you will about Adi (an everyone has pretty much said everything) but he can flat-out play.

• Mario Santana was hurt in the match. I don’t have any decent info yet on how long he’ll be out. Out of respect, I will refrain from criticizing his play this week.

• Osvaldo is a little bitch. Multiple sources are reporting that the little princess was a little extra feisty yesterday as he tried to impress his former teammates. I can’t even remember that bicycle kick anymore…

Anyway, with two wins on the trot, things seem to be back on track. Sadly, these last two matches are the first two games I’ve missed watching all year, since they have come at important work times. I am jonesing from the Viola withdrawal right now, but I am nervous that I will jinx the team if I start watching them again. Do I have to skip every upcoming match until they lose?

Also, the transfer window closed yesterday. As all the cynics expected, not much happened. We did our business earlier. The big disappointment for me, and for many of you, is that we did not get Ivanovic, the Chelsea defender. That certainly would have been nice. There we all sort of ridiculous rumors that we were going to sell half the team, so I am glad that didn’t happen either, even if I never really thought it would.

About the only exciting football thing that happened for me yesterday was that Arshavin (probably) has been sold to Arsenal. I am indifferent to the fortunes of Arsenal, but Arshavin is one of my favorite players in the world who doesn’t wear a purple shirt, and now that he plays in the over hyped Premier league I will at least get to see him virtually every week.

As for us, however, we will simply have to plug away with what we have. A few weeks ago, that prospect might have been grim. But with a healthy and motivated Mutu on our team, it is clear that anything is possible.