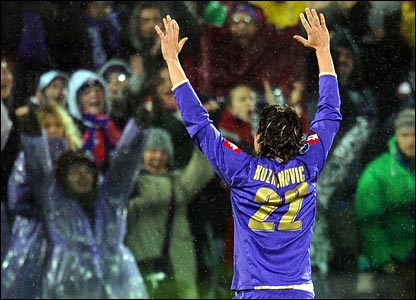 Another Sunday means another massive Serie A match for our boys in purple. This week a trip to Reggio Calabria to face Reggina Calcio at the Stadio Oreste Granillo awaits Fiorentina (that place looks like a real dump). Let face it, Reggina have been terrible this season. They sit bottom of the table with a paltry 17 points from 25 games. Their home form is hardly intimidating either, with just 2 wins, 5 draws and 5 losses from 12 matches. Considering the matches the other CL contenders have this weekend, 3 points on Sunday would go a long way towards keeping Fiorentina in the top 4 and quieting the budding discontent in Firenze.

Tough Matches for the CL Challengers

Roma face an away match at the San Siro against Inter. Genoa are away to Siena and unfortunately we are all well aware of just how tough that match will be. Napoli are trying to salvage their hot start to the season and will surely provide a stern test for Juventus. And, Milan are away to Sampdoria. Hopefully our boy Pazzini will help us out there.

Prandelli vented his frustrations with both the recent performances from the team and the building criticism of him in Florence. They are certainly worth a read. It seems like NickyViola and other commenters who have been critical of Prandelli are much closer to what Prandelli is hearing in Florence. I'm not sure if this is a vocal minority or if fans are really starting to turn on the Prandelli/Corvino/Della Valle "Fiorentina Project" and start demanding results NOW.

I've made it clear recently that I trust Prandelli to maintain Fiorentina's top 4 position. He's done it for 3 years running and I believe he'll do it again. After the season, clearly, a few things need to be addressed. But for now, it really is vital for Fiorentina to finish in a CL qualifying position so that the team can continue to develop and hold onto our best players. There are constant rumors about the players that Corvino is looking at for next year, and it is also consistently mentioned that various clubs are after some of our young Viola studs (the worst rumor here as far as I can tell is that Arsenal are interested in Melo - he is EXACTLY the player they need).

Either way, it is probably best to keep the Prandelli debate going in Ted's post below. I'm looking forward to hearing everyone's thoughts on the situation.

Fiorentina: Well, Prandelli rested Kuz on Thursday and took off Semioli in the 2nd half so I could see both of those two returning to the starting lineup. Plus, Bonazzoli is certain to start due to Gilardino's suspension. I'm thinking the inclusion of the big target man and the fact that this is an away fixture means we'll see the 4-3-3 and try and take advantage of Bonazzoli's abilities in the air. So here we go:

I'm going 2-1 for the Viola. Mutu and Bonazzoli for the good guys and the well-traveled Bernardo Corradi for Reggina.

No USA television for this one, so post up a stream tomorrow if you have one. I'll see you all sometime around then. Forza Viola.