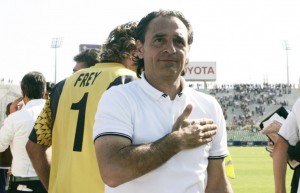 I want to start by apologizing on behalf of both myself and Tim. We are both swamped with work and are getting up previews and match reviews a little later than we would like. Thanks for all your patience. Speaking only for myself, and not for Tim, this whole “New Great Depression” thing has hit me and the business I work for pretty hard, and has left everyone there with more work to do than normal. And since I like my job, I want to keep it, and that occasionally leads to some delays here at the ole’ Fiorentina blog, which I still enjoy the hell out of writing. Today’s post might be a little shaky, then, since I got up at 5AM to be at work by 7:30 (with a 2-hour commute) and I didn’t finish my workday until about ten minutes ago. (It is now 8PM where I am.) Regardless, I am pressing forward, albeit with a glass of Johnnie Walker Green Label in hand.

The big news out of Beautiful Florence, of course, is that the Viola were eliminated from the UEFA Cup yesterday by Ajax, after drawing 1-1 on the road in their second leg. I only saw bits and pieces of the match, including the wonderful goal we scored, (thanks to a damn sketchy feed) so I can’t say too much about it. I am aware of the discontent in the masses who think The Great Man made some poor substitutions, and I concede that any substitution involving bringing Almiron into the game is probably an error. But more on that in a moment. While I am certainly disappointed in yesterday’s result, I would argue the tie was really “lost” in the first leg when we allowed a so-so club (all respect to Ajax, but c’mon) to beat us 1-0 on our own ground. Hopes were high yesterday, but that first poor result really put us in a hole.

Also, I would politely disagree with some of my pals on this board and elsewhere who think it is a good thing that we went out of the cup. I certainly think they make a fair point that we will be a more rested team without the cup competition, (especially since almost every other Italian team is also out or soon to be out of Europe) but I also think an extended cup run can do wonders for team spirit and form a bond that can transcend cup matches and really help the club in league play. I do believe, like last year for instance, that the Viola’s extended cup run instilled a tremendous sense of self belief that carried over to the point where we achieved a CL spot in the league. I am afraid the loss this week may have the opposite effect.

Also, as I said, I like the UEFA Cup. I was thrilled by last year’s competition.

The larger issue that has come up in recent weeks has been the increasing rate at which fans are questioning Coach Prandelli. Fair enough, I say. There are no sacred cows here. And I have been the first to say that while the team has an excellent record in the league as of late, they are not playing up to their ability.

But I think we need to consider carefully whether this is really Pradelli’s fault. It may be an awkward day to make this argument, as some of the substitutions did not seem to work out yesterday, but I don’t mind. I have seen trainers like Ferguson, Mourinho, Wenger, and Capello all make what in retrospect are poor substations. They cannot see the future. They can only put players on the pitch and hope they perform to their ability. Prandelli thought Almiron would provide a veteran presence and a steady hand in the last few minutes of the game. He was wrong. But does this relate to the larger issue of whether he is doing a good job?

I’ll lay my cards on the table, or at least two of them. The first is my belief that Prandelli is the coach for us. No surprise to anyone who has read me before. My second belief, simply stated, and one that transcends most sports, is that coaches get too much credit and too much blame. I’m a big believer in the idea that players play. It is the players that decide the game. Sometimes a coach can have more of an effect in sports that are highly technical and require constant tactical decisions (like American football) but in real football there is only so much a coach can do once the whistle blows.

However, some of you feel that Prands is getting to the point where he needs to go. These folks are certainly entitled to their position. No one will get shouted down on the discussion boards as long as I have a say in it. But I think if you want to make that argument, that Pradelli has lost the plot and needs to go, you need to have reached conclusions to five separate questions before you get to that point:

1). Is Prandelli to blame for the holes in the defense? We all agree that the team has needs, as all teams do, and that the first of those needs is a CB to play with Gamberini. If you feel that Prandelli must go, than you must feel he played some sort of role in letting Ujfalusi go and believing in the Kroldrup/Dainelli Pu Pu Platter.

2). Is Prandelli to blame for players under-achieving? By my count Monto, Kuz, Semioli, Donadel, Pazzini before he left, the Pu Pu Platter and (according to some observers) Vargas all having sub-par years. I’m just talking about the main players, not fringe Almiron guys. Are the players responsible for their play, or is it the coach?

3). If yes to the above, then doesn’t Prands get credit for the play of the overachievers, like Mutu, Felipe, Gamberini, Bassey, and my Precious (who, remember, is still three years away from being able to legally purchase beer in the United States?)

4). How do you explain away the results? Because by my reckoning Fiorentina is a mid-sized club at best, yet they played in the Champions League this year and are on the road to repeating that feat. It would seem that he had SOMETHING to do with that success, and you would need to find another way of explaining it if you want him gone.

5). To put it simply: who are you going to replace him with that’s better?

I would even dare to add a sixth point to the discussion. Players come and go, executives like Corvino are largely faceless, and the owners are remote from the fans in a certain way, but no one is more identified with a club than a long-term coach. Think of Man United, Arsenal, and a few other big clubs and you inevitably think of the gaffer. In Prandelli we have one of the most basically decent men in profession sports, a man you can admire no matter who you support or what you believe in. Is that worth something?

Anyway, excuse my ramblings. Like I said, it’s late for an old man like me. Tim will be back soon with a preview of this weekend’s action. I for one need a 5-0 Viola win like you wouldn’t believe.