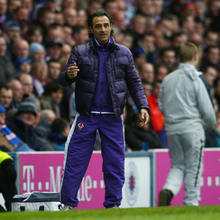 Cesare Prandelli pointed out after the win against the Flying Donkeys on Sunday that while the team has 4 wins and 1 draw in the last 5 Serie A games, concerns abound regarding the quality of the performances from the Viola of late. I, frankly, have been stunned to see some of the commenters' harsh words for the Fiorentina boss. What I'd like to do in this post is address a few facts (more accurate, hopefully, than Rafa's facts), and try and figure out how Prandelli can make the best use of his available players for this week's games away to Ajax on Thursday and away to Reggina on Sunday.

Let's start off by looking back to the start of this season. It is fair to say that the goals for the 2008/2009 edition of the Viola were to maintain a top 4 place in the Serie A (and earn a place in the CL qualifying stages at the least) and to try and advance into the knock-out phase of the CL. Well, the CL was a dissapointment, but perhaps this was a big ask considering the relative strength of the team. I think that as fans we learned that the players need a bit more seasoning to deal with the high pressure and high level of play in the CL, and that the Viola's defense is lacking (we have gone on and on about the need for a partner for Gamberini in central defense, Pasqaul/Vargas at LB have been inconsistent and Commotto has been pretty good at RB but I don't think we can realistically see him as a long-term solution). However, there is still a good chance of advancing against an unimpressive Ajax side on Thursday.

Let's look to the main focus, the Serie A, and as usual, I'd like to start with a gander at the table. Right now, things are tight, but Prandelli has the team sitting in the 4th place spot, with 45 points from 25 games (1.8 points per game). But, let's look a little deeper at the last few years and see what it has taken in the Serie A to obtain CL qualification. For the 2007/2008 season, Fiorentina finished in 4th with 66 points (1.73 points per game). And in 2006/2007, Milan finished 4th on 61, though the totals are off due to the points deductions. That season was actually Prandelli's best haul, with 1.92 points per game.

Why am I bringing this up? My point is that with 13 games left to play in Serie A, Fiorentina are currently in a CL qualifiying place and have a team strong enough to make another run deep into the UEFA Cup. And while I'm still going to try and plan what Prandelli should do to get results in the next two games, realize that I'm a 28 year old attorney who has never played a game at a level above high school. I think all of us need to take a breath and relax, Cesare's got this shit.

Lineups for the week:

Let's start off with what we know. Jorgensen says he's ready to come back. Gila Monster bitched out a referre on Sunday so he's suspended for the Reggina match. Bonazzoli is not on the UEFA Cup Roster. Here's what the rumor merchants at goal.com think.

Here's what I'd like to see. Bassy; Pasqual, Dainelli, Gamberini, Zauri; Monto, Melo, Kuz; Jorgensen; Mutu, Gila Monster. If Prandelli needs goals, he can bring Jo-Jo in for Zauri and push Jorgensen to RB, and Semioli for Kuz since he's more of an offensive threat.

We'll delve into some more detail tomorrow in a post with the review of the Ajax game and a look to Sunday's Serie A match. But, considering the suspensions, here's what I'd like to see.
Bassy; Vargas, Kroldrup, Gamberini, Commotto; Gobbi, Melo, Donadel; Mutu; Jo-Jo, Bonazzoli.

This gives Fiorentina a good chance to win both games, and allows Prandelli to stay with his 4-3-1-2 formation. Plus, we can see if either Jorgensen or Mutu are comfortable there. If this doesn't work, there are available subs and he can shift to more of a 4-3-3 during the course of the game.

I apologize for a long and late post. I had hoped to put this up yesterday but a bout of the stomach flu prevented that. Let's use this post to discuss the Ajax game this afternoon.

Prediction: Ajax 0 - Fiorentina 3. The chances will be created and finished today. I'm sure of it. Goals for Monto, Gila and Mutu.

Also, what are thoughts on my other idea for a post. Is Monto not as good this year because our LB position has been below par (It is definately a step back from Ujfalusi to the Vargas/Pasqual combo) and he constantly has to cover? Does he have more defensive responsibilities?

Forza viola and I'll check back in the comments section this afternoon.