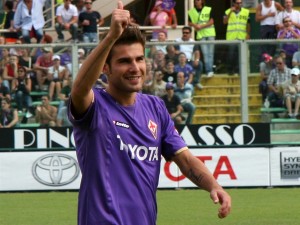 How many last-second goals does a fan get in one lifetime? It’s hard to say. They happen, of course, but not all that frequently. I’m talking about real last second goals, as in “the ball goes in the net and the ref blows the whistle before the other team can pull the ball out of the net” type goals. I figure they’re about as frequent as no-hitters in baseball, to use a comparison American sports fans will understand. If you are fan of one baseball club for twenty or thirty years, you may see five or six or seven no-hitters. So they are not unheard of, just quite rare.

Well, we Fiorentina fans have just been blessed with out second last-second goal in as many weeks. Last weekend, vs. Genoa, the boys came back from being 3-0 down to draw the match, with all three goals courtesy of Adi Mutu, including the final goal at the last moment of the game. Adrian did it again this week with another powerful, sublime strike that, this time, won the match and earned all three points. What we have witnessed in the last few weeks is a phenomenal treat for any sports fans, and we should not take it lightly. It could easily be ten years before we see another last-gasp goal like that. As a fan of a club, today must be considered the best of times.

I’m not going to spend a ton of time focusing on Adrian Mutu in this post. We all know his quality, I hope, and how important he is to the team. His ability to create his own shot, his ability in the clutch, his sense of the “moment” and his raw skill all combine to make him our most important and most feared outfield player. The Great Man has earned his share of criticism this year, including some from the discussion boards on this site; but I shudder to think where the team would be if he had not been there to halt Adrian’s seemingly immanent move to Roma.

All that being said, today’s game was a sobering one. We played, at home, one of the worst teams in Series A (no offense and all respect to the Donkeys, who played gutsy today) and could barely beat them. Our second goal was helped immensely by the fact that out opponents, just like last week, had gone down to 10 men. The first half particularly was an awful display of football. Anyone who watched it would honestly believe it was the team in yellow that was fighting for a Champions League spot.

In lieu of summarizing the match, I thought I would go with my “random thoughts” approach to looking at what went wrong today. Obviously we know what went right.

• The latest fad here (and on other boards) is to get on Jovetic’s case. To a degree, Prandelli has echoed this criticism. I’m not seeing it, I’m afraid. Sure, he wasn’t at his best today (I don’t think anyone on the team was) but for weeks on end, and especially when Mutu was out injured, he was our only player who would get on the ball and run at a defender. I love him in the hole and love that he’s getting real minutes. Keeping in mind that he’s still only a kid, this only mean that he’s going to become more of a force sooner because of the experience. Yes, I won’t mind if he get his time scaled back a bit as guys come back from injuries, but I think we’re fooling ourselves if we think Santana or anyone else on the club would be doing that much better of a job.

• That being said, the midfield continues to worry me. Monto looked okay for stretches and breathtaking for a few moments, but also had large chunks of mediocrity. (Although I acknowledge that he is forced to drop back and help out in defense whenever Vargas makes a run up front.) Kuz, as now everyone seems to agree, is playing pretty terribly. We need another option on the wing. If it’s Semioli, fine. But we need to try something else.

• Alternatively, Melo continues to impress, but (and this ties in to my thoughts on the back line) I feel that we need to start holding him further back to help out with the defense, especially in the center. It’s a shame, of course, because Felipe is good on the ball, a smart passer, and occasionally unleashes a hellacious shot. But if we don’t somehow get more help for the awful Kroldrup/Dainelli platoon in the back, then that will be the Achilles heel that will do us in.

• I like Vargas just fine (as I think most of you all know) but I am also fine with seeing more of Pasqual. I liked his hustle today.

The crux of all this is basically the same as last week. In fact, I’ll repeat what I said last week: yes, it’s good when a team can win when they’re not having their best day. That’s the mark of a winner. But when a team seems to be “not having its best day” every week, and has to rely on its superstar to pull the fat out of the fire match after match, is there something seriously wrong? Watching the team today, and especially watching the team in the first half, it is impossible not to answer other than, “yes, something is wrong.”

What is it, then? Is it the coaching? Is it the players? Did we overestimate their skill, or is the sum simply not equal to the separate parts? Is it the midfield? The defense? Are we missing just one or two pieces, or do we need an overhaul?

I don’t mean to pessimistic, of course. You guys know what a crazy optimist I am. The Viola remain in fourth place, and still obviously in thick of CL contention. They also have more than a fighting chance of advancing in the UEFA Cup.

But while acknowledging al of those manifold and manifest strengths, I say again that something in out beloved club needs to be fixed, and I ask all of you to explain exactly what it is.